Scary Tales: Once Upon A Nightmare was one of the eight haunted houses that were featured during Halloween Horror Nights: Reflections of Fear. It was the third entry in the Scary Tales franchise. It was located in the Parade Warehouse. It followed the theme of the other Scary Tales houses before it with fairy tales gone wrong. The house included scenes from The Wizard of Oz and Alice in Wonderland.

In 2008, Universal decided to tie in all eight of their haunted houses to patients of Bloody Mary. This haunted house would tie in to Diane Bennett. She had a fear of stories that end with "happily ever after", To "cure" her fear, Bloody Mary surrounded her with insane patients from the local asylum that would recite lines from these stories. Mary told her that if she wanted them to stop, all she had to do was say the safe word. Diane eventually went into hysterics and said the word, which caused the inmates to kill her.

The Alice in Wonderland scene from this haunted house would have a tribute scene in the 2010 haunted house, Horror Nights: The Hallow'd Past. In 2015, the Goldilockes and the Little Red Riding Hood scene would receive tribute scenes in the haunted house, Jack Presents: 25 Years of Monsters & Mayhem. Also in 2015, the house received a sequel scarezone titled Scary Tales: Screampunk.

"Bite into the apple and you shall see. The way these tales ought to be. Wind your way through twisted fairy tales where princesses don't get saved, children don't escape the woods and there is no escape from the rabbit hole!"

Find yourself "Once Upon a Nightmare" as you wind your way across a landscape filled with cherished fairy tales, as they have never been seen before. The Evil Queen's scribes have written a new chapter on terror, where princesses don't get saved, children don't find their way out of the wood, and there is no escape from the rabbit hole!

Wind you way through twisted fairy tales where princesses don't get saved, children don't find their way out of the wood, and there is no escape from the rabbit hole!

This took place in the Tales realm of The Mirror. Here the Evil Queen used the Scribes of Fear to rewrite Fairy Tales to her liking.

Guests would enter the queue to the left of the E.T. ride. The queue would go through the exterior queue of the E.T. ride, before going to the Parade Warehouse. After reaching the end of the queue, guests entered the house through a fairy tale-like cottage.

Walking toward the first room the screams of victims being tortured could be heard. In the room, the victims were chained to posts on a raised platform. Near them were their torturers, The Scribes. The Scribes were using their victims to rewrite the fairytale world and guests walked through to enter into that world.

The first room of the new fairytale world was a troll bridge. At the end of the bridge was a tall tower with Rapunzel's limp body hanging out of the window. Her very long hair was draped down covering the doorway which guests were made to walk through to the next room. That next room was that of fairy tale princesses. In a coffin was Snow White's body which was torn in half and every so often a zombie Snow White would pop out of the hidden door behind the coffin to scare guests. Near Snow White was another fairytale princess, Cinderella. She was locked into stocks by her evil stepmother, who had cut off both of her feet and would occasionally taunt Cinderella or scare guests with a kitchen knife. The stumps of Cinderella's legs dripped blood as guests walked past toward the next room.

The next room was the mad tea party from Alice in Wonderland. It was lit solely by strobe lights causing the scareactors in the room to appear to guests to be moving much faster than they actually were. The room was covered in flowing banners coming from a raised central padded platform. In the middle of the platform was Alice who was ripping and eating the intestines of The White Rabbit. Alice would also move towards guests as they walked by her, sometimes offering some of the rabbit to them to eat. Bouncing and running around the guests' path were a number of Mad Hatters. They would act as distractions for Alice and also scare guests themselves, chasing them to the next room, inside The Witch's Gingerbread House from Hansel And Gretel. In the dungeon full of ovens, the sounds of little children being cooked alive can be heard as The Witch/Eelmouth would pop out from behind them scaring guests as they walked by her.

Following the witch's house were two long hallways full of mirrors. As guests walked by the mirror in the middle of the first hallway strobe lights would begin distracting guests as The Evil Queen from Snow White reached out to grab at them. Additionally, in one of the mirrors appeared the ghostly apparition of the event icon, Bloody Mary. Following the mirror room was a field of corn from The Wizard of Oz where The Wicked Witch of the West had taken over The Land Of Oz. Guests walked through the corn field with vines hanging down in the middle of the path. On one side, Dorothy had been killed, scalped and tied up on a stake by The Wicked Witch, and The Scarecrow plays with her brain. From the sides of the path demented Munchkins and corn stalk creatures popped out to scare guests. Near the end of the path was The Tin Man who attacked guests with the axe on his hand, and The Cowardly Lion who roared at guests as they left the room.

The next room was inside of the small cottage of The Three Bears. Laying on a table were the remains of Mama Bear and Baby Bear. Every once in a while, Papa Bear would pop up to create a huge scare. Pacing behind the table was Goldilocks, looking relieved and telling guests as they passed her that everything was going to be "just right". The next room of the cottage was a small bedroom, with the dead Big Bad Wolf lying in bed. Walking around the room was a grown-up Little Red Riding Hood, wearing a revealing medieval-style outfit made of leather with red satin laces. With her distraction, Red's grandmother would pop out of the Big Bad Wolf's belly, scaring guests as they walked past, then go back in. Red herded guests through to the final room. The Scribes returned to reveal that they were led by The Evil Queen. As they walked around the guests looking for new victims, she stood high in the air. Guests walked underneath her getting a final scare on their way out of the house.

This house ties into Dianne Bennett's case. Dianne was the daughter of one of the students involved in Mary Worthington's disappearance. She became afraid of fairy tales that ended in "Happily Ever Afters" after learning that her husband became unfaithful towards her. She was sent to Dr. Mary Agana to cure her of these fears. Dr. Mary had her sit in a circle of hypnotized patients transferred from an asylum and ordered them to recite fairy tales to her. Should the reciting become too much, Dianne had to say the "safe word" and end the session. Dianne fell into a fit of hysteria as the patients began to recite and shouted the "safe word". This was the trigger for the hypnotized patients to attack and kill her.

The first two images are from the Halloween Horror Nights: Reflections of Fear website. 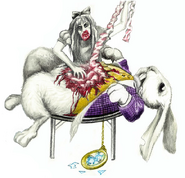 Dungeon of the Witch's Gingerbread House

Concept art of the Evil Queen and Red Riding Hood 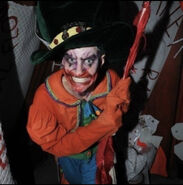 From WMFE
Add a photo to this gallery

Retrieved from "https://halloweenhorrornights.fandom.com/wiki/Scary_Tales:_Once_Upon_a_Nightmare?oldid=120348"
Community content is available under CC-BY-SA unless otherwise noted.