Scary Tales: Deadly Ever After was one of the ten haunted houses that was featured during Halloween Horror Nights 28. It was located in Soundstage 24 along with Carnival Graveyard: Rust in Pieces. It was sixth entry in the Scary Tales franchise (the fifth in Orlando).

On August 21st 2018, Universal announced that a haunted house that served as another entry into the Scary Tales franchise would be coming to their Halloween Horror Nights event that year. The codename for this house was "Poison", referring to the poison apple that The Evil Queen gave to Snow White, although they did not appear in the haunted house.

The haunted house would be one of two located in Soundstage 24, the other one being Carnival Graveyard: Rust in Pieces. Soundstage 24 is one of the larger soundstage facilities designed to be used as filming locations for films and television shows.

The Wicked Witch of the West has cursed the land of the fairies, twisting beloved stories beyond recognition. There are no fairytale endings here.

The realm of the fairies was once peaceful, but the Wicked Witch of the West has seized control and afflicted the land with a dreadful curse. Her pestilence has twisted beloved fairytales beyond recognition and bathed everything in blood and screams. Villains are crueler than ever before and the good have been infested with evil. Discover the horrific new reality of the stories you thought you knew. There are no fairytale endings here.

The queue entered to the right of the Virtual Line area of the Jimmy Fallon ride. The queue followed a road that led to a series of loops that looped to the right of Soundstage 24. After the guests went through the loops, they would go around the soundstage and enter a door. The guests then entered a long corridor with hanging banners depicting some of the fairy tales that would appear in the house. In this hallway The Wicked Witch of the West would talk. After the hallway was the facade, which was a giant castle with The Wicked Witch of the West flying above the guests. The facade held a map of the Realm of the Fairies on top of the castle.

Entering the castle guests would go down a small corridor where sometimes The Scarecrow would jump out of a boohole. Exiting the corridor guests entered a dungeon where they would see Dorothy chained up crying and wishing she could go home. On one of the walls was the corpse of The Scarecrow and periodically a hand would come out through his chest. After that guests would go into a room where The Cowardly Lion would roar at guests. The Wicked Witch of the West would also pops out of a boohole. The second fairy tale in this house was Hansel And Gretel. The smell of gingerbread was present throughout this room. You entered The Witch's Gingerbread House where a burnt Gretel would pop out from behind a wall eating a hand and talking about how good it tastes. The Witch could also be seen eating Little Red Riding Hood. Near the end of the room was Hansel also eating a hand and talking about how good it tastes.

The next fairy tale was The Three Little Pigs. This room was set inside one of the pig’s houses. The room smelled like burning wood and The Big Bad Wolf's head could be seen burning in a pot over the fireplace. The Three Little Pigs would each jump out in this room and one of them is wearing The Big Bad Wolf's skin on their face. Guests would then enter the outside of a giant tower where long strands of hair could be seen in the ceiling wrapping itself around a bunch of dead bodies. A man could be seen jumping out of a boohole with hair coming out of him. Rapunzel also jumps out screaming about how her hair is alive. The next room was surrounded with spiderwebs. Little Miss Muffet could be seen sitting on her tuffet dead with egg sacs in her exposed abdomen. Two giant Spiders appeared in this room spraying water at guests. After that guests would enter the cottage from Goldilockes And The Three Bears. In the cottage was Goldilocks stabbing Mama Bear. Baby Bear could be seen to her left coming out of a window growling.

"A shattered rainbow, your path unclear, you're not in Kansas anymore, my dear." (Wicked Witch of the West)

"By light of moon and darkest night, let all fabled creatures beget what's right. The good turned evil, the evil grown worse, the Realm of Fairies now under my curse, and in this story, let all feel pain. Come one, come all, where chaos now reigns." (Wicked Witch of the West)

"Nibble, nibble, little mouse, I found someone nibbling on my house!" (The Witch)

"Where's your wizard now?" (Wicked Witch of the West)

"I curse you!" (Wicked Witch of the West)

"This is my realm." (Wicked Witch of the West)

"The Realm of the Fairies is no more." (Wicked Witch of the West)

A picture of banner designs for the house that was posted on the Halloween Horror Nights Orlando Twitter on 8/21/18. 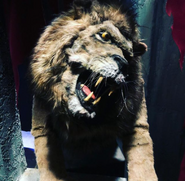 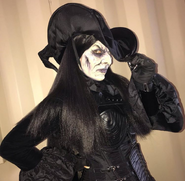 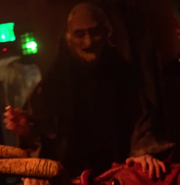 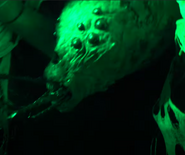 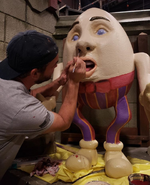 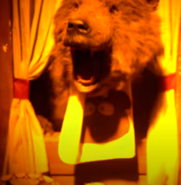 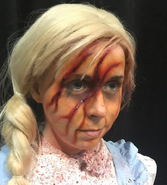 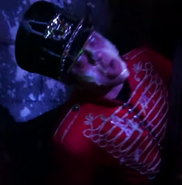 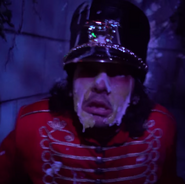 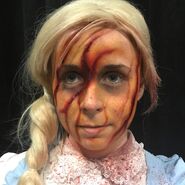 Escape From The Nursery

Retrieved from "https://halloweenhorrornights.fandom.com/wiki/Scary_Tales:_Deadly_Ever_After?oldid=117616"
Community content is available under CC-BY-SA unless otherwise noted.