Scarecrow: The Reaping was one of the nine haunted houses that were featured during Halloween Horror Nights 27. It was located in Sprung Tent 1.

On August 31st, 2017, Universal announced that an original haunted house based on an abandoned farm infested with living scarecrows would be coming to their Halloween Horror Nights event that year. The codename for this house was "Brains", as The Scarecrow from The Wizard of Oz wanted a a brain.

In 2006, Universal built two hurricane-proof tents behind the World Expo area of the park specifically for holding Halloween Horror Nights haunted houses. This house would be located in the southernmost one (called Sprung Tent 1). The house would prove to be very popular for how scary it was, and would even go on to win the House of the Year award in 2017.

At a long-abandoned Depression-era farm, vengeance takes root, and the only harvest that will be reaped is you.

Scarecrow:The Reaping.No Character in the maze is under six foot 2 in height. They are crazy Scarecrows that take over a Depression-era farm. And this gross mic group of people. Or creatures...want to take you,and remove you from the earth! - A description said by Patrick during the media for Halloween Horror Nights 27.

The house takes place at an abandoned Depression-era farm. The land, once known for its vast bison-traveled grasslands had been laid waste because it was over-plowed and the soil depleted by generations of careless farmers. But now the Land and Wind want revenge. And so a giant dust storm descends and Scarecrow Guardians rise from the Earth to chase away visitors who dare enter their land.

After walking through the queue you are greeted with many cornstalks. In front of one of the cornstalks is a skeletal looking scarecrow with horns. On the left you see an old weather vane and to the right is what looks like an old abandoned farm. You enter the Sprung Tent through the abandoned farm.

Then you enter a room with a bunch of crows making noises. The crows also poop on you (its actually water). You then enter another room that is really dark. Ropes hand down and it blasts you with air simulating crows flying past you. After that you enter another really old decaying room with many scarecrow bodies stuck in the wall. Two scarecrows jump out from above you. Going to the end of the room you hear this loud thumping sound. A giant scarecrow with a huge mouth jumps out from behind a curtain. The final room is a room with many strobe lights and mirrors. Corn stalks hang down from the ceiling and two scarecrows are in that room to give you a final scare. After that you exit the house.

The facade for Scarecrow: The Reaping.

One of the scarecrows that appeared in this house (top right). 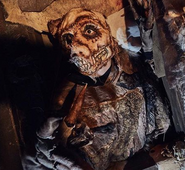 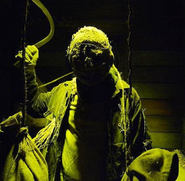 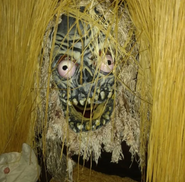 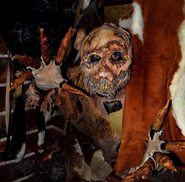 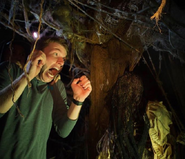 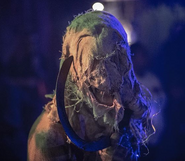 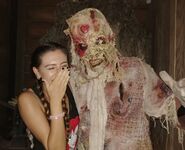 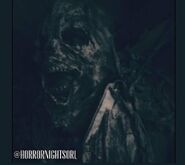 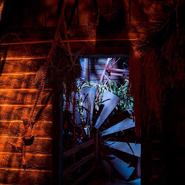 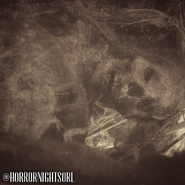 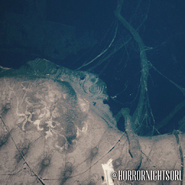 Retrieved from "https://halloweenhorrornights.fandom.com/wiki/Scarecrow:_The_Reaping?oldid=103861"
Community content is available under CC-BY-SA unless otherwise noted.