In 2011, Universal decided to build a haunted house based on the popular scarezone from the previous year, Saws N' Steam. This would mark the first time a scarezone at Halloween Horror Nights would be given its own house. The story remained the same, but the house expanded on the lore.

In 2011, every house tied into a story relating to a choice a character had to make (influenced by Lady Luck). This house's story was focused many characters who sign up to go to a utopian society called The Horizon, which is said to make everyone's dreams come true. Applicants must take a test (administered by Lady Luck) including a question asking how much water they "yield". If you passed the test, you would be treated like livestock until your 30th birthday, where you would then be harvested for all of the water in your body.

Spinning blades and massive, crushing pistons await you around every corner as you are forced deeper into the bowels of a mechanical nightmare. Give yourself to “The Machine.”

Spinning blades and crushing pistons threaten your every step as you're forced deeper into the bowels of a mechanical nightmare.

Guests would enter the queue next to the entrance to the JAWS ride. The queue would loop around a few times before reaching the facade.

At the end of the house, guests entered the facility of the Horizon as they heard the sound of propaganda approving the Horizon. "Into the machine! Become more than you thought possible! Pass through this doorway freely and give the aqueous matter inside you, and the Horizon is yours! With your willing sacrifice, the pain and suffering that comes with a thirty first cycle will be transformed into the peace and tranquility that the Horizon has, waiting for you! Inside is your redemption! Walk this path and your selfless act for the greater good will be rewarded with light and prosperity! Never again will you go hungry or know the feeling of thirst! All this and more will be handed to you in the Horizon! Into the hydrophilic machine and explore an existence void of sorrow!

Untouched by tragedy! Never again will you shed a tear or suffer an injustice! No more will your wants and needs be ignored! Reside in the Horizon and you will be given unlimited hospitality!" However, as guests walk through the halls filled with propaganda signs and posters, the posters vanish to expose the truth of the Horizon as an assembly line with hooked bodies being carried off to the processing plant is revealed.

In the next room, racks of circular saw blades dripping with meat and torn skin rattle and slam toward the line as a worker appears from an alcove. Passing by a small section of pipes and machinery, steam whistles and metal-on-metal screams as another worker appears with a knife.

Guests pass a man being slowly fed into a crusher machine and one of the chainsaw-wielding Elite and see the silhouette of a man twirling a scalpel on a stretched piece of fabric ahead of them. Passing behind the wall, they find that the surgeon has tied a young woman down and is stripping the flesh from her legs, distracting them from the worker hidden behind some pipes opposite him.

The next hallways is filled with flesh compactors, small presses that crush piles of flesh and body parts to squeeze every last drop of blood from them. Continuing into a storeroom, workers hidden behind stacks of barrels use air hoses to surprise the guests.

Continuing into the storage tanks, clear viewing ports in the tanks show bloody flesh, eyes, and digits floating in the water. Several large workers are hidden in here, along with an Elite. As they escape into the next hallway, guests are splashed with water dripping into a vent.

The next hallway is extremely foggy, filled with the steam of the machinery. Workers armed with sparking electric cables hide themselves in the clouds and lean over the railings to attack. A waterfall is seen ahead, and a man in what resembles a diving suit lunges through the water to splash guests. Another worker is hidden next to the waterfall. Passing through a large holding cage, bars on the sides of the cage suddenly slam down with a loud clang.

In the final generator room, the poundings of Nine Inch Nails' "Ghosts 1-8" as heard in the original scarezone leads guests to the exit past the generator as bolts of lightning crackle across the room, several workers hiding amongst the machinery. As they exit the house, one final Elite waits outside with his chainsaw to send them screaming into Amity. 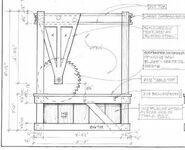 The Horizon is Benevolence Propaganda Banner as seen in the Saws N Steam: Into the Machine Facade [From HorrorUnearthed]

One of the The Horizon Contentiment Propaganda Posters [From HorrorUnearthed]

Retrieved from "https://halloweenhorrornights.fandom.com/wiki/Saws_N%27_Steam:_Into_the_Machine?oldid=110543"
Community content is available under CC-BY-SA unless otherwise noted.