SAW: The Games of Jigsaw was one of the nine haunted houses that took place at Halloween Horror Nights 27. It was based off of the first 7 Saw films as well as containing a sneak peak at the 8th: Jigsaw. It was located in the Shrek Theater.

On August 14th, 2017, Universal announced that a haunted house based on the first eight SAW movies would be coming to their Halloween Horror Nights event that year. The codename for this house was "Buzz", as in buzzsaw.

The house would be the third located in the Shrek Theater. The houses put in this location would be built within the second, less-used theater for the Shrek 4D attraction.

The traps are set. All that’s missing is you. The Jigsaw killer has returned to torment you with his twisted take on poetic justice.

SAW: The Games of Jigsaw. When they presented SAW in 2009, the maze was build on five individual films, that made up the SAW series by that point. Coming Oct 27th,SAW Series will release it's unprecedented 8th film. And they our tapping all of those films, and the concept and creation of this event. You see the last room...a maze, a room poled directly from the newest film "Jigsaw".- A description said by Patrick during the media for Halloween Horror Nights 27.

After entering the Shrek Theater you go into a room with a chain-link fence on both sides of you with T.V monitors showing people in traps behind the fence. After going through that you go into a corridor. On the left is the sign that says Wilson Steel and in front of you is a Billy the Puppet doll who rides on his bicycle towards you. Before you enter the next room a Pighead pops out from behind a hole in a door.

The first trap room is the Razor Wire Maze. You are actually inside the maze and at the end you see the Venus Flytrap prop and the Water Cube prop on a table. Also at the end of the room if you look up you can see Paul Leahy screaming. The next room is the Electric Bathtub. When you enter Mallick jumps out saying "I can't do it! I can't!". You see Luba's deceased corpse lying in the bathtub. Brit also jumps out at the end of that room.

The next room is the Angel Trap room where you see Detective Allison Kerry trying to get out but failing. The Angel Trap rips open her chest revealing all the guts inside. After that is a room with a walkway with 2 sides of the walkway having scareactors. The one on the left is Jill from Saw 3D wearing the Reverse Beartrap and the one on the right is Michael Marks wearing the Venus Flytrap.

The next room features a bunch of Pigheads where two of them are real and the rest of them are dummies. After that is a cold room where you see Detective Matthews' headless body and the two blocks of ice that crushed his head. You also see the frozen corpse of Danica Scott hanging on the wall. You then exit the room walking under the quadruple shotgun and they blast you with air simulating you getting shot with multiple shotguns.

The next room featured three traps. The first one was The Drill Chair from the original Saw where you see Jeff Ridenhour strapped to a chair and you see to drills coming closer and closer to his face. The next trap you encounter is the Knife Chair where you see Cecil Adams strapped to a chair pushing his face through some knives. The final trap is the Scalping Seat where you see a scalp attached to a seat. Then popping from behind a wall is a scalpless Brenda who jumps out screaming.

After that you walk into a room with the Pound of Flesh trap. On your left side you see Eddie cutting off pieces of his fat to put on the scale and on your right you see Simone cutting off her arm. The next room is the Bathroom Trap where you see Adam with a hacksaw jumping out from behind the wall. One of Jigsaw's henchman also comes out from behind a boo-hole. At the end of the Bathroom Scene you can see Dr. Gordon and his foot lying on the ground. The final room showed the Bucket Room from Jigsaw where a lady with a Bucket on her head screams. Mitch's body could also be seen. At the very end, ne of the Pig-Faced Henchman jump out for one final scare. 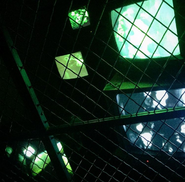 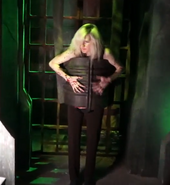 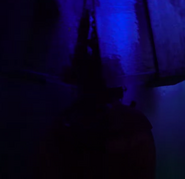 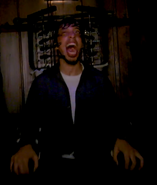 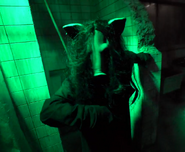 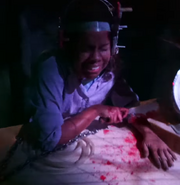 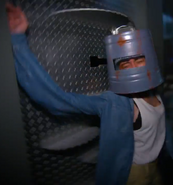 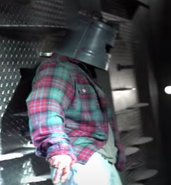 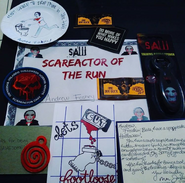 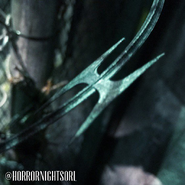 Retrieved from "https://halloweenhorrornights.fandom.com/wiki/SAW:_The_Games_of_Jigsaw_(Orlando)?oldid=108368"
Community content is available under CC-BY-SA unless otherwise noted.