SAW was one of the eight haunted houses that was featured during Halloween Horror Nights: Ripped from the Silver Screen, serving as the main house for sub-icon, Billy. The house was based off of the first six SAW movies. It was located in the JAWS Queue.

In 2009, Universal acquired the rights from Lions Gate Entertainment to a couple of famous horror movies to use as haunted houses for their Halloween event. One of these movies was SAW. The house would feature scenes and traps from each of the five SAW movies that were out at the time.

2009 was the first year Universal decided to give codenames to all of their haunted houses. Some people say the codename was "Blade", while others said it was "Hammer".

The house tied in to a story on the Halloween Horror Nights website, Trapped. In it, a rude theater-goer got trapped in a SAW-esque way. The house was located in the extended queue for the JAWS ride, making it the sixth haunted house in this location.

In 2017, a haunted house based on the first eight SAW movies would come to the Halloween Horror Nights event called, SAW: The Games of Jigsaw.

For years you have come to celebrate Halloween and to witness the weakness of others. The only way to gain redemption for this voyeuristic obsession is to truly know what it means to bleed, to feel weak; to experience pain. Jigsaw will give you this experience. Happy Halloween. Let the games begin.

See if you can escape the latest demented game of the serial killer Jigsaw. But what happens if you aren't just the victim, but the trap itself?

During the screening of a certain film, one man disturbed the other patrons by talking loudly on his cell phone, complaining that he wasn't getting a good signal. Attempts to tell him to stop where met with vulgar responses. When the staff told him to leave, he cursed at them and left.

Weeks later, the patrons began to complain of an unbearable smell. The staff noticed it seemed to becoming from the balcony and the seldom-used roof access. Following their noses, they found the source of the smell: the decomposing body of the man with his cell phone in hand and his right leg twisted in the badly rusted ironwork that supported the ladder stairs.

Apparently, he tried to climb to the upper area to get a better signal, but found himself trapped instead. This section of the theater had originally been built to be as soundproof as possible so opera stagehands could access a catwalk (long since removed to accommodate the advent of motion pictures). Any screams for help would have been almost impossible to hear. And, as investigators noted, the signal was no better up there either.

The only strange thing was the list of names investigators found near the man's body. His wife, the one who called the police when her husband had not returned home from the theater, did not recognize any of the names and said her husband never mentioned them.

Guests would enter the queue next to the entrance to the JAWS ride. The queue would loop around a few times before reaching the facade.

As guests entered the warehouse, they found themselves in a room holding cages and torture device. As they walked past the narrow hallways, they ran into Billy, Jigsaw's doll, riding a tricycle from the movies. Around the next corner, guests walked through the bathroom from the first Saw, where Adam Stanheight and Lawrence Gordon were chained to the walls, and came up to guests, yelling "get me out of here!", as guests walked through the next hallways (with multiple pigheads hanging from the ceiling on chains), they passed different victims of Jigsaw getting tortured while scareactors wearing pig masks popped out of various places. Next, guests walked past the recently dead body of Jigsaw, laying in a hospital bed with a slit throat. The Saw character Jeff stood over Jigsaw's body, revving his buzzsaw. Moving into the next room, guests saw the Rack Trap from Saw 3. As guests passed down a long hallway, three pig-masked actors came up to and attacked them. Lastly, before exiting, guests walked through a circular room, with a spiral on the floor, containing about six men with pig masks standing in a circle in the walls.

At random intervals, a scareactor dressed as Adam would join an entering group of visitors and strike up conversation, walking with the visitors until being grabbed from the group by another scareactor in a pig mask.

Images from the Halloween Horror Nights: Ripped from the Silver Screen website until otherwise noted. 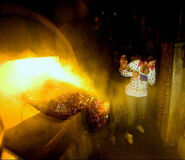 Retrieved from "https://halloweenhorrornights.fandom.com/wiki/SAW?oldid=114140"
Community content is available under CC-BY-SA unless otherwise noted.