S. Quentin Quale a.k.a Doctor Satan is a murderer, torturer, and master surgeon. The character is a scareactor that appeared in the Rob Zombie's The House of 1000 Corpses Maze in 2000. He later came back in Rob Zombie's House of 1000 Corpses: In 3-D Zombievision during two events in 2010 and 2011. Afterwards, he was brought back again in two different houses in Oelando and Holywood in 2019. 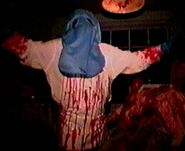 Add a photo to this gallery
Retrieved from "https://halloweenhorrornights.fandom.com/wiki/S._Quentin_Quale?oldid=117956"
Community content is available under CC-BY-SA unless otherwise noted.