Rock of Ages was one of the four shows that were featured during Halloween Horror Nights V. It was located in New York, in front of the Metropolis Tribune building.

Experience the "Crypt Jam" with music legends from this world and beyond! It's a street party like no other!

The show was a rock 'n roll party on the streets of New York. A band called Raven & The Nevermores appeared in this show and a DJ played pop songs from the 1960s-1980s. Michael Jackson's famous song, Thriller, was reportedly played many times during the event. Allegedly, an actor portraying O.J. Simpson also appeared in the show. 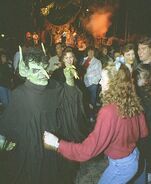 Image from the Halloween Horror Nights: Sweet 16 website page.
Add a photo to this gallery
Retrieved from "https://halloweenhorrornights.fandom.com/wiki/Rock_of_Ages?oldid=99041"
Community content is available under CC-BY-SA unless otherwise noted.