Start a Wiki
WARNING! This page contains information from an event that is still going on. If you wish to remain spoiler free, do not read on.

Revenge of the Tooth Fairy was one of the two haunted houses that were featured in the "Halloween Festivities" at Universal in 2020. It was located in Soundstage 24.

For their 29th Halloween Horror Nights event, Universal wanted to create a haunted house based on the Tooth Fairy. However, the haunted house was replaced by Us, so Universal decided to feature the house at the following event.

After Halloween Horror Nights 30 was cancelled, Universal announced on September 14th, 2020 that two haunted houses were coming for a "Seasonal Experience" that year. Revenge of the Tooth Fairy would be one of the two chosen.

The house would be located in Soundstage 24. Soundstage 24 is one of the larger soundstage facilities designed to be used as filming locations for movies and television shows.

The innocent traditions of the tooth fairy hide a darker ritual. All children must give up their baby teeth to the goblinesque tooth fairies or pay a gruesome price. Step into an old manor that has been overrun by yellow-clawed fiends who extract teeth by force. It’s an eye for an eye, a tooth for a tooth.

There is a centuries old pact between mortals and the goblinesque tooth fairies. In exchange for safety from these wicked creatures, humanity made a deal: Every milk tooth of the young is to be forfeit in exchange for treats or money. There have been many times in which mankind has not lived up to its half of the bargain. There are children who question. Children who dare to hold back the payment. Tonight is one such night. The youngest child of the Westhorne family is refusing to place his small incisor under the pillow. It seems like such a small thing. A wish to hold onto childhood just a little longer. But to deny these sinister creatures their payment is to find out just how far they will go to extract their fee. Only when the swarm of imps leave toothless, tortured corpses in their wake will humanity relearn the terrible lesson.

(Revenge Of The Tooth Fairy Backstory)

During the testing weekend, the queue entered to the right of the Virtual Line area of the Jimmy Fallon ride. The queue followed a road that led to the left side of Soundstage 24. The line would eventually reach the door to the Soundstage from the back.

Upon entering the house, guests would see a long corridor with three banners hanging from the ceiling which say "What Happens... When A Child Says No.. to the Tooth Fairy". At the end of the corridor, guests would be greeted with a video on a storybook cover that says "Revenge of the Tooth Fairy". The video was drawn like a storybook, and explained the backstory of the house:

Set in Victorian London, the story centers around young James Westhorne. James lives in a very large mansion with many servants at his disposal. His parents spoiled him, making him very stubborn and greedy. One night, a Tooth Fairy visited him after he lost his first tooth. James refused to give the fairy his tooth. His Nanny warns him that if he doesn't give them his tooth, the "Faerie Folk" will hurt everyone in the house and take James away to turn him into a horrific monster for the rest of eternity. Despite the warnings, James still refuses to give up his teeth. The final frames of the video hint at what James will soon become.

"Once Upon A Time... a Tooth Fairy appeared in the bedroom of young James Westhorne." "The Faerie Folk aren't kind, nor forgiving!" "But they'll hurt us, and take you away!"

Taking a right turn, guests would encounter the facade for the house, which was James' bedroom in a children's book style. As the narration of the queue video played in the background, the characters in the facade would move. James could be seen sitting on his bed, the Nanny could be seen walking towards James, and a Tooth Fairy could be seen peeking through a window before disappearing and reappearing behind James' bed. There were also various storybook pages scattered about with lines from the opening narration written on them.

"You'll be doomed to live forever as a cursed monster!" "I don't believe in fairies!"

After passing by the facade, guests would travel down a short hallway that looked drawn. The hallway would slowly transition into reality.

Entering James bedroom, guests would hear the narration explain how the Tooth Fairy killed the Nanny and took James away to make him pay for not giving the fairies his tooth. James could be seen crying on his bed over the corpse of the Nanny. A Tooth Fairy stood behind the bed holding a little bag of teeth. Another Tooth Fairy jumped out behind guests. There were also two decapitated heads with their jaws torn open hanging from the ceiling, one hanging by the closet and other hanging near the doorway leading into the hallway.

"...and killed the servants one and all."

Next, guests entered a corridor, where the narration explains that the Tooth Fairies killed all of the servants. James also begins to cry and feel a little sick as he watches all of the carnage. A Tooth Fairy holding a large needle jumps out from behind a boo-hole, and James could be seen in a separate corridor. Passing by a large stained glass window, guests would encounter one of the servants with their jaw ripped off.

""The Fairies then visited Mother and Father..."

The next scene featured another small corridor with a drill hanging up on the wall. The sound of a drill can be heard in this room. After that guests would enter the Master Bedroom, where it is revealed that the Tooth Fairies killed Mr. and Mrs. Westhorne (James' Parents) to teach them a lesson for spoiling their child. Mr. and Mrs. Westhorne could be seen laying on their bed without their jaws. Occasionally, Mr. Westhorne would get up and gurgle at guests. A Tooth Fairy would also jump out in front of a window across from guests.

Then, guests would enter the Library, where Lord and Lady Westhorne (James' Grandparents) were slain by the Fairies. Lord Westhorne's jawless corpse could be seen in a rocking chair while Lady Westhorne's corpse could be seen with a large hole in the back of its head. Through a hole next to one of the bookshelves, guests would be startled by a severed and jawless head. Another Tooth Fairy jumps out across from it. Guests would exit the room through a secret passageway behind a bookshelf.

"...the point, that children musn't forget."

Guests would then enter another room, where a Tooth Fairy jumped out at them from the left. Guests would then see the Butler standing on a the arms of a chair and strung up from the ceiling by wire wrapped around his teeth and jaw. The narration explains that the Fairies set up the Butler like this to show the children what happens when you don't give up your teeth to the fairies. A Tooth Fairy jumps out from behind the butler. At the end of the room, guests could see James crying with his hands in his face. However, he abruptly stops and lunges at guests, revealing his face which has become monstrously deformed like the Tooth Fairies. Another Tooth Fairy jumps out at guests across from him.

"...ripped them out in one complete set."

After that, guests would enter the kitchen. The servant bells on the wall could be seen ringing on the left, and the cook's burnt corpse could be seen sticking out of the oven. Another jawless servant jumps out at guests on the left with a Tooth Fairy gnawing on her neck.

"Every child owes a debt."

Next, guests would enter the Laundry Room. Sheets hung from the ceiling as lightning flashed from above. The narration explained that James is now starting to want to continue the mayhem. As the lightning flashes, the silhouettes of the fairies can be seen behind the sheets. There were also small feet peeking out from under the sheets. Two Tooth Fairies would jump out at guests while they winded around the sheets.

The final scene of the house took place in the Tooth Fairies' lair. After the Fairies killed the entire family, they held a fairy jubilee with James. Winding through the dark caves, guests would be attacked by various Tooth Fairies, including a now fully transformed James. At the end of the house, the closing narration explains that the story of James shows exactly what happens when you don't give the Tooth Fairies your teeth.

"The lesson here is plain to grasp, the teeth you must provide. For there is no escape, no reprieve, no place to run or hide."

At the very end, a Tooth Fairy jumps out for one final scare.

The facade for the house. Image from Erick Orantes on Youtube. 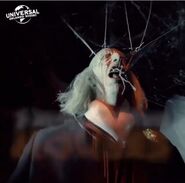 - Narration in the Servant's Hall

The Vampires Of Venice
Add a photo to this gallery

Retrieved from "https://halloweenhorrornights.fandom.com/wiki/Revenge_of_the_Tooth_Fairy?oldid=101723"
Community content is available under CC-BY-SA unless otherwise noted.