PsychoScareapy: Maximum Madness was one of the seven haunted houses that was featured during Halloween Horror Nights: Sweet 16. It was located in Soundstage 22.

For the 2006 event, Universal would decide to have all of their haunted houses (and scarezones) be sequels or prequels to landmark houses and scarezones in the past. One of these would be PsychoScareapy: Maximum Madness, a sequel to the immensely popular house Psycho Scareapy. Like the previous house, the story was that the inmates of Shadybrook Asylum have risen up and taken over the asylum, but this time, they would all be led by Jack the Clown.

The house would also serve as the icon house for Jack the Clown, as he really did not have an icon house during both of his icon years. Because of this, all of the inmates dressed up like clowns.

The house would receive a sequel the following year titled Psychoscareapy: Home for the Holidays.

Step inside Shady Brook Hospital where Jack is up to his deadly tricks.

Shady Brook Hospital has been plagues with rioting inmates off and on for years. These small incidents of chaos have always been resolved quickly and contained with minimal casualty. However, Shady Brook's newest resident is about to change all that. If you think you know insane you don't know Jack. Step inside and asylum where the sideshow is death and the "big top" has padded walls.

On the Halloween Horror Nights: Sweet 16 website, guests could enter the backstory page for the house by clicking on a card with the top half of a Jack of Spades card and the bottom half of a black Joker card on its description page. The description page showed the logo of the house, with the words Maximum Madness appearing as if typed on a typewriter. After a while, Jack the Clown would disappear as he laughed.

On the backstory page, guests could click on and read the daily schedule for Shadybrook, a psychological evaluation sheet (with a jumpscare from Jack, a resignation letter following the riot, and a health report. Guests could also click on a VHS tape to see the security feed of Shadybrook. Also on the page were pills, a party hat, letters to Eddie Schmidt, a party streamer, and a form of admission for a patient.

A paper that appeared on the Halloween Horror Nights: Sweet 16 website. 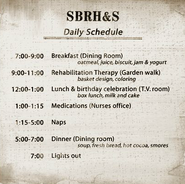 Audio that played on the Description Page:

Audio that played when the psychological evaluation was clicked on in the Backstory Page:

Audio that played when the VHS was clicked on in the Backstory Page:

Guests would enter the queue of the house to the left of The Boneyard, right in front of Soundstage 18. The queue would make its way to the right, towards Soundstage 22 which was where the house was located. Once inside, guests would see the entrance to Shadybrook Rest Home and Sanitarium, complete with flashing red lights warning them of the mass breakout that occurred inside. Guests would enter the asylum through the front doors.

Throughout the haunted house, guests would be thrown into the chaos of Shady Brook asylum, as the inmates (dressed in clown makeup) wreck havoc on everything. The famous dirty bathroom scene (complete with the smell) from the previous house came back. The house also included more scenes of carnage and mayhem, some featuring Jack himself.

I posted this in the Psychoscareapy page, but I don't know if anyone saw it on there.

I remember going through the house on the daytime tour, and the tour guide told us to ring the buzzer on the front desk for something cool to happen. But when I went through the house at night, there was a scareactor dressed as a nurse sitting on the desk with her hand over the buzzer button. So either it was broken, or it did something really annoying she didn't like happening. Does anyone know what the buzzer did? -HHNVAULT MEMBER

She used the buzzer a lot. Sometimes enticing people to hit it on there own. It gave a cheap startle scare. Unfortunately as the event went on, the first two scenes in the house were tired of hearing the buzzer every few seconds. 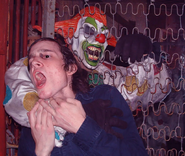 Retrieved from "https://halloweenhorrornights.fandom.com/wiki/PsychoScareapy:_Maximum_Madness?oldid=104853"
Community content is available under CC-BY-SA unless otherwise noted.