Project Evilution (or simply Evilution) was one of the five haunted houses that was featured during Halloween Horror Nights: Islands of Fear. It was located in the Triceratops Discovery Trail.

Originally in 2002, when Cindy was planned to be the icon for the Halloween Horror Nights event that year, there would be a haunted house and scarezone based in the same universe as the Jurassic Park movies called JP Extinction. Universal would create an original tie-in story for this house, in which a mad scientist named Dr. Burton mixed human and dinosaur DNA to create human-dinosaur hybrids. To help build the house, Universal would use props from The Boneyard.

After Cindy was scrapped as the icon, the house was renamed Project Evilution. Other than the name, the haunted house stayed largely the same.

Deep within the jungle, top secret genetic experiments have gone horribly wrong, creating hideous mutants half human, half dinosaur... and all evil.

Guests would enter the queue next to the Jurassic Park Discovery Center. The queue would go behind the Discovery Center to make its way to the Triceratops Discovery Trail. The facade was a giant set of wooden double doors that led into the first lab.

Guests seemed to walk through the Triceratops Discover Trail attraction backwards whilst going through this house, as one of the first things they encounter is the triceratops. The house was seemingly alot darker than the other ones that year.

Guest make their way through a ruined Jurassic Park base. Inside, a triceratops (made to look in distress by strobes) appeared behind a door. Various bloodied up workers beg the guest to run from the carnage going on, including Dr. Burton, the man responsible for these horrors. Guests would encounter a Dilophosaurus containment area with a large hole in it. A scientist would come out from the hole saying "They all escaped". Another scientist popped out behind some barrels. Velociraptors pop out of the bushes, looking for prey. Along the way, you find out the gruesome fate of one of the Triceratops (It can be found decapitated near the end). One seen featured a Dilophosaurus that would pray guests with water. At some point, you encounter the aforementioned Man/Dinosaur hybrids, wanting you to be their next meal. Finally, ending the house, the terrible fate of Dr. Burton is revealed: he was hung by the Dino-Men he created. 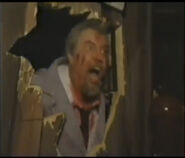 Image from Hauntfreak.com
Add a photo to this gallery

Retrieved from "https://halloweenhorrornights.fandom.com/wiki/Project_Evilution?oldid=117234"
Community content is available under CC-BY-SA unless otherwise noted.