Otis B. Driftwood is a fictional serial killer played by actor Bill Moseley who first appeared in the 2003 horror film House of 1000 Corpses, directed by Rob Zombie. He is one of the more visible and outspoken members of the murderous Firefly clan and is personally responsible for the deaths of at least three individuals. A fetishist to the extreme, Otis is characterized by his strong southern accent, long blond hair, and a penchant for spouting his personal philosophical credo. The character appeared again in the 2005 sequel, The Devil's Rejects. He appeared during a few Halloween Horror Nights events in Hollywood. He also appeared in the House of 1000 Corpses haunted house during Halloween Horror Nights 29. 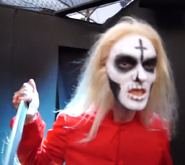 Otis B. Driftwood in the House of 1000 Corpses haunted maze. 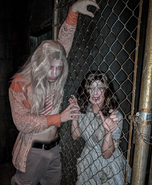 Add a photo to this gallery
Retrieved from "https://halloweenhorrornights.fandom.com/wiki/Otis_B._Driftwood?oldid=101294"
Community content is available under CC-BY-SA unless otherwise noted.