Nightingales: Blood Pit was one of the ten haunted houses that were featured during Halloween Horror Nights 29. It was located in Sprung Tent 1.

In an Ancient Roman arena, grisly creatures are drawn to dead and dying gladiators. With nothing to protect you, you're history.

THEY FEED ON BLOOD & FEAR

Ancient Rome has suffered its worst drought in centuries. A ruthless emperor has declared the gladiatorial games will continue nonstop until the rains return.

As blood soaks the cracked earth, the nightingales, a grisly race of creatures, are drawn to the dead and dying. You enter the fray just as the rain begins to fall, but not in time to save yourself from this ancient hellscape. You recoil with fear and disgust as the ravenous nightingales feed.

Try to survive alongside gladiators, but with nothing to protect you, you're history.

Ancient Rome is suffering its worst drought in centuries. The ruthless emperor has declared the gladiatorial games to continue nonstop until the rains return. The gruesome bloodshed of the games is horrifying enough, but then come the creatures.

As the blood soaks into the earth, the nightingales feed on the dead and dying. The nightingales are a grisly race of creatures that have been here since the dawn of time. You may think you’re familiar with their past feeding frenzies, but you haven’t seen them like this. You’ll try to survive alongside the gladiators as the ravenous nightingales tear into their victims and notice that fresh blood has come into their midst…

The queue started to the right of Depths of Fear and to the left of the Coca-Cola station. It took guests down a road that would go past Sprung Tent 1 and loop around back. The facade for this house consisted of a row of roman pillars with banners. A Nightingale eating a horse could be seen outside of a large stone building. Guests would enter the building, where a Nightingale would jump out before even entering the house.

Once guests were in the house, they would enter the areas underneath the coliseum where the Roman gladiators are held until it is time to enter the arena. Guests would see several dead gladiators locked in cells, with one severely injured gladiator trying to escape his cell while a Nightingale appears on the opposite side. Further down the room, guests would see another gladiator in a pit attacking a chained up gladiator, by kicking (or punching) his head backwards. Past this, guests enter a corridor with dead bodies on the walls and Nightingales attacking in every direction. A Nightingale blocks the guest's path before a female gladiator appears and kills it. As the hallways get more cramped, more Nightingales start to attack with one gladiator with an injured arm popping out.

Guests would then come to a room with several corpses hanging from the ceiling, as the coliseum collapsed due to the chaos. The Roman Emperor himself pops out reaching and begging for help before a Nightingale scares him back to his hiding place. At this point, guests are no longer walking through the coliseum, but instead through the streets of ancient Rome. After that, guests would enter the area where cages are raised up into the coliseum, where guests could see a rotating pole (representing a gate being opened. Out of one of the gates, a lion has broken loose and tries to attack them, but a gladiator holds it back. At this point the Nightingales appear more aggressive attacking anything that moves. One is seen chewing on a horse while another is seen on an elevated platform reaching down at guests. Two of the Nightingales share a body hanging from a noose by swinging it back and forth. Guests would then enter the Nest, a completely dark room where the most desperate of Nightingales try to feed. When fresh meat enters their lair they go into a frenzy before guests left the house. 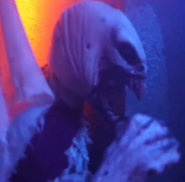 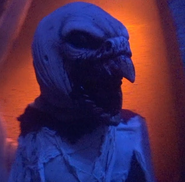 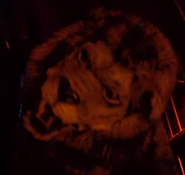 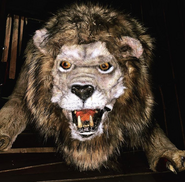 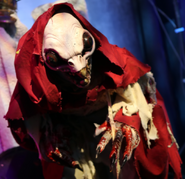 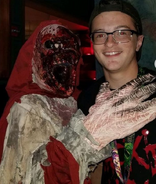 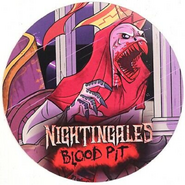 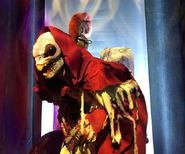 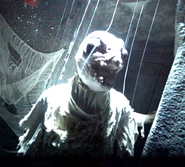 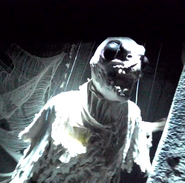 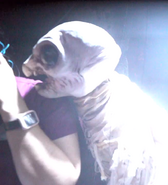 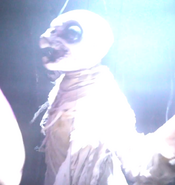 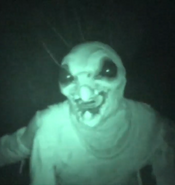 [Picture from AdventureByDaddy.com]
Add a photo to this gallery

Lifting Curse (Vengeance)
Add a photo to this gallery

Retrieved from "https://halloweenhorrornights.fandom.com/wiki/Nightingales:_Blood_Pit?oldid=103412"
Community content is available under CC-BY-SA unless otherwise noted.