In 2007, Universal decided to have only one scarezone featured at their Halloween Horror Nights event that year. The scarezone would encompass the entire park and would be named the Midway of the Bizarre. The scarezone was split into many sections, the most popular of which was Troupe Macabre located in the Central Park area.

This would ultimately be the last time the Midway of the Bizarre name was used at Halloween Horror Nights. However, this would not be the only scarezone to encompass the entire park.

Jack the Clown has plumbed the depths of his deprivation to transform all of Halloween Horror Nights into the Midway of the Bizarre- a spine-tingling, multi-sensory spectacle! See such sinister sideshows as the Rat Lady, the Chainsaw Drill Team, Motormaniacs, Killer Carnies, and the Troupe Macabre!

The zone accompanied the entire Universal Studios Florida park, and featured such characters and scenes as Jack the Clown, the Carnival of Carnage, the Rat Lady, Chainsaw Drill Team, Killer Carnies and the Troupe Macabre. The midway (on some nights) also featured The Director , Lizzie Borden, the zombies from Deadtropolis, the Inmates of Shadybrook Asylum, and a mini scarezone called FreakZone (Kidzone), where heavy metal music and 80's music played. 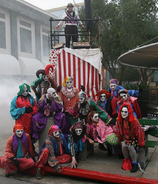 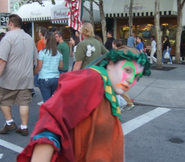 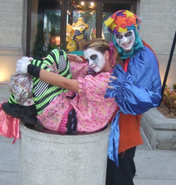 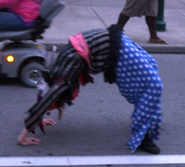 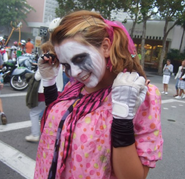 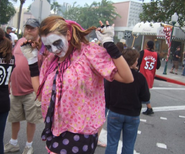 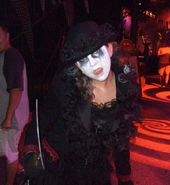 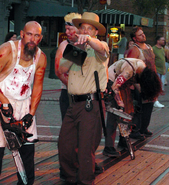 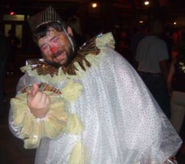 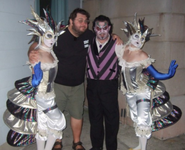 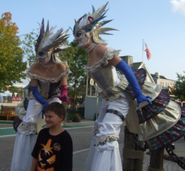 Retrieved from "https://halloweenhorrornights.fandom.com/wiki/Midway_of_the_Bizarre_(2007)?oldid=116182"
Community content is available under CC-BY-SA unless otherwise noted.