Legendary Truth: The Wyandot Estate was one of the eight haunted houses that was featured during Halloween Horror Nights: Twenty Years of Fear. It was located in Soundstage 22.

A scene from this house also appeared in the Death section in the interactive game, The Warehouse eXXperience which appeared on the Halloween Horror Nights website. The house would be located in Soundstage 22, one of the smaller soundstage facilities designed to be used as filming locations for movies and television shows.

Using a machine that gathers ghosts, the Spirit Seekers are about to get more than they bargained for. The Spirit Seekers have created a machine to attract spirits, and are broadcasting live from one of the most "haunted" sites in the US. Ghosts of the Wyandot Estate, built by Malcolm and Lydia Wyandot, are told to have inhabited there since Malcolm killed his wife, 13 guests and himself on October 30, 1929. Now as the murdered hear their call they answer the team with terrible violence.

The Spirit Seekers have come up with a machine that actually gathers spirits toward it. The group has decided to do a live broadcast from inside one of the most reportedly "haunted" sites in the entire United States, The Wyandot Estate, built in the 1920's in Carey, Ohio by the entrepreneur Malcolm Wyandot and his wife Lydia. The house has been rumored to be haunted since Malcolm brutally killed 13 dinner guests and his wife Lydia before committing suicide on October 30, 1929. The team is about to get more than they bargained for as the murdered hear their call and answer with terrible violence.

The haunted house is set in the town of Carey, Ohio. This was also the setting for multiple haunted houses from the past including The Skoolhouse, The Spawning and Leave it to Cleaver.

Once inside the soundstage, guests would pass by a small electronics trailer bearing the Spirit Seekers logo and covered with computer equipment and TV monitors. Walking up the steps to Lydia's Bed & Breakfast, a ghost hunter in the entryway (next to some more computers and equipment) briefs the guests on their journey and welcomes them to the investigation.

Entering the first hallway, guests pass over a plexiglass floor and see a ghost with a glowing face gliding under their feet, distracting them from another which lunges from a side alcove. Looking off to the side, the wall seems to become transparent and a ghost looks to be floating behind the wallpaper. Portraits on the wall change as the guests walk past them, turning into grotesque corpses.

Passing by a long, empty hallway, guests enter a sitting room with several couches and chairs around a center area. A ghost flies backwards down a nearby hallway, apparently being dragged by some unseen force. Suddenly, faces appear in the windows along the back wall with a slamming noise accompanying them, and as the last face disappears a ghost lunges out from a room next to them.

In the bedroom, a young girl sits on a bed and plays around in the sheets. Suddenly, the bed begins to glow and drawers slam open and shut, furniture shakes, and a cymbal-banging monkey toy activates on its own. Another ghost appears from the closet.

Entering a room loaded with computer equipment, it appears to be entirely empty except for a single ornate chair....which suddenly rises up and reaches for the guests.

Passing into the conservatory, several bronze statues stand around the room and among the plants. As lightning flashes, the statues come to life and leap at the line and change poses. Guests enter another hallway, where a hole broken through a door shows a glowing image of The Storyteller on the other side, distracting them from several more ghosts.

In the final room, more computer equipment and wires cover the basement as the spirit-gathering machine works. Several ghosts are hidden throughout the room, and light flashes and gusts of air blow from the cloth-covered shelves as the spirits fly. 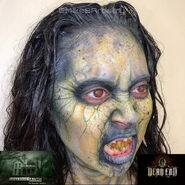 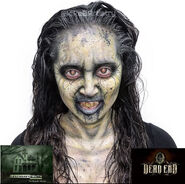 Retrieved from "https://halloweenhorrornights.fandom.com/wiki/Legendary_Truth:_The_Wyandot_Estate?oldid=120281"
Community content is available under CC-BY-SA unless otherwise noted.