"Just enough time for a tasty treat before our next feature presentation, the show's about to begin, so let's...Leave it to Cleaver." - The Usher

Leave it to Cleaver was one of the eight haunted houses that was featured during Halloween Horror Nights: Ripped from the Silver Screen. It was located in the Disaster! Queue.

In 2009, Universal decided to build two original haunted houses produced by the Fangoria magazine. One of these two houses was Leave it to Cleaver. The story of the house is that a meat company called Meetz Meats based in Carey, Ohio secretly uses human flesh in their meat products.

2009 was the first year Universal decided to give codenames to all of their haunted houses. Some people say the codename was "Magazine", as it was sponsored by Fangoria, while others said it was "Pleasant Vielle".

The house tied in to a story on the Halloween Horror Nights website, Severed. In it, a family going to the movie theater discovered a finger in one of their hot dogs. Afterwards, the family became extremely carnivorous. The house would be located in the large extended queue for the Disaster attraction.

Meaty Meetz, one of the scareactors that appeared in this house, appeared at the end of the 2015 tribute house, Jack Presents: 25 Years of Monsters & Mayhem.

Sam Meetz cares for and about the people of Carey, Ohio like they were his own family. Samuel Meetz works for the people of Carey, Ohio as a butcher, bringing them the freshest meat possible. With a steady livestock of transients and town lawbreakers with which to serve, and a staff of volunteers who will preserve their towns deadly secret by any means necessary, there is truly no end in sight for Samuel or his family business. As Sam always says: Meet Me at Meetz… The Z stands for cannibal.

With a steady livestock of transients and town lawbreakers with which to serve, there is truly no end in sight for Samuel or his family business.

When a certain movie was released, a family of four purchased the Universal Palace Theater's snack bar's newest treats: hot dogs and hamburgers along with some popcorn and soda. However, during the movie, the daughter let out a scream when she took a bite out of her hot dog and found a severed human finger in the sausage.

Investigators collected the sausages from the theater and found they were produced locally and sold to the theater. They were unable to find any key ingredients as the manufacturer refused to tell them what was in the sausages. "Our secret recipe is the secret to our success," he said.

The strangest part however, was what happened to the family. Traumatized by what had happened, they all became ravenous carnivores and refused to eat anything other than meat products.

Guests would enter the queue of this house to the left of the entrance for Beetlejuice's Graveyard Revue. The queue would go to a backstage area behind the Disaster building, where the line would loop around multiple times before entering the Disaster building from the back. A queue video would play on one of the walls of the building.

The queue video for the attraction is hosted by Sam Meetz, a butcher who owns and operates Meetz Meats, in Carey, Ohio. He explains in the video that his grandfather, founder of Meetz Meats, came to America from Romania during WWI. Initially starting out the company by selling meat from a pig and bovine livestock, Sam's father, who inherited the business, began losing money during the Great Depression. So, he decided Meetz Meats' livestock would secretly be changed. Instead of butchering pigs, the company would instead secretly butcher hobos, town lawbreakers, and unauthorized visitors to the factory into delicious meat.  Not only did this keep the storehouses full, it helped keep the streets "clean of vagrants, riffraff, and ner-do-els". After the first couple humans were butchered, the new products became an instant success, and Sam's father decided to keep the human livestock going. Sam now continues his father's trend, and has become a millionaire, with Meetz Meats as the most popular meat factory in Wyandott County, Ohio.

Guests would enter the house through the exterior entrance of the factory. The factory building was made of bricks and had the Meetz Meats logo painted on the front.

Throughout the house, all the scareactors can be seen wearing Meaty Meetz masks. The first rooms in the house is the punch-in counter and the employee locker rooms, with factory workers popping out from behind corners at random intervals.  The next room is a built-in daycare center for the employees' children, who are being taught how to slaughter and bleed hogs.  Guests then enter the factory's kitchen, with scareactors chopping up pieces of meat.  After passing through several hallways and encountering the cleaning staff, guests enter the livestock room, which depicts people locked in cages, being prepared to get butchered, and scareactors come out with chainsaws acting as if they are going to slaughter them. In the next room, various pieces of recently butchered human meat can be seen hanging from the ceiling and on the sides.  There is then a hallway with blood covering the walls and lights flashing.  In the next scene, the meat is being prepared in the freezer room, and employees of Meetz Meat's are getting ready to sell it at the butchery.  In the final scene of the house, you walk through a highly lit-up diner where Sam Meetz is selling his meat.  Once he catches sight of surviving "unauthorized visitors" he exclaims "Hey, how'd you survive my tour?!". While guests exit the house, one last scareactor, a man dressed up as the Meetz Meat's mascot, Meaty Meetz, comes up to them with a chainsaw.

I Get A Kick Out Of You (Remastered)

Streamline Susie
Add a photo to this gallery 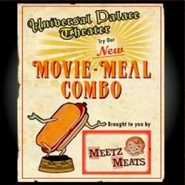 Bloody Mary's head used in her Leave it to Cleaver cameo.

Leave It To Cleaver logo on the building [From HorrorUnearthed]

From dragsterfan420 on the TPR Forum

From robbalvey on the TPR Forum 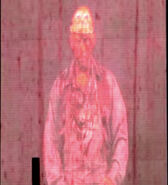 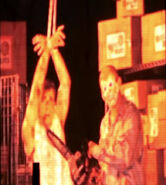 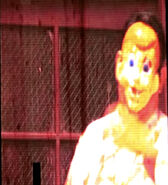 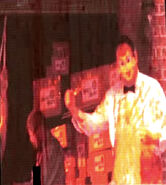 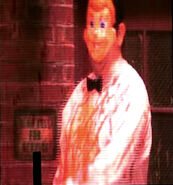 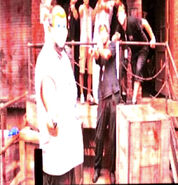 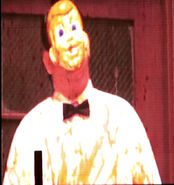 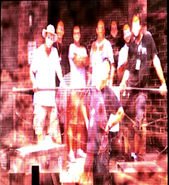 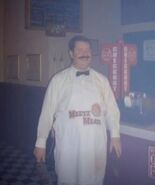 Credit to: John Duckworth
Add a photo to this gallery

Retrieved from "https://halloweenhorrornights.fandom.com/wiki/Leave_it_to_Cleaver?oldid=117562"
Community content is available under CC-BY-SA unless otherwise noted.