La Llorona was one of the six scarezones that was featured during Halloween Horror Night 2010. It was located on Western Street.

For the first time, cross paths with La Llorona, who after drowning her children and herself, returns to haunt the living, wailing for her lost children "Aaaay, mis hijos" and searching for new souls to replace them.

La Llorana ("The Weeping Woman") is a ghostly figure dressed in white who cries out, "Aaaay, mis hijos!" ("Oh, my children!")

Legend tells that she was a beautiful woman who drowned her children to be with the man she loved. But he rejected her...So she drowned herself, too. Her ghost is doomed to wander, vainly searching for her children for all of eternity.

According to the tale, she will kidnap wandering children or children who misbehave. Some also believe that those who hears the walls of La Llorana are marked for death.

Come face to face with her at Halloween Horror Nights and find out for yourself. 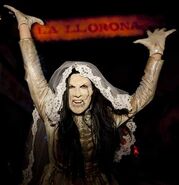 Image from HHN Hollywood youtube
Add a photo to this gallery

Retrieved from "https://halloweenhorrornights.fandom.com/wiki/La_Llorona_(Scarezone)?oldid=117746"
Community content is available under CC-BY-SA unless otherwise noted.