The Kerezans (also known as the Walkers) are one of the six Legions of Horror introduced during Halloween Horror Nights 22.

The Kerezans are relentless, do not move fast, but will not stop. Although they appear to unite in one group, these are individuals out for themselves with absolutely no interest in others of their line...and it is just by coincidence they have gathered in their pursuit of sustenance. Singular and focused. Unconcerned what others think. Inspirational to novelists, filmmakers and playwrights.

Kerezan is more of a state of being rather than a segregated class within the Collective. The Kerezan designation signals a transition within the individual operative. While they are singularly focused, they often gather in groups to pursue a common goal and are considered relentless. Further information is classified by law 31-11 and is available to other collective class operatives with specific rank of senior staff.

Their trophy is a severed hand in a jar of embalming fluid.

Circa Egyptian Predynastic (6000 BC). 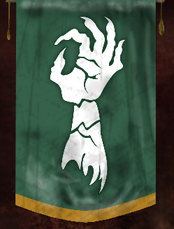 Add a photo to this gallery
Retrieved from "https://halloweenhorrornights.fandom.com/wiki/Kerezans?oldid=81314"
Community content is available under CC-BY-SA unless otherwise noted.