JP Extinction was one of the six scarezones that were featured during Halloween Horror Nights: Islands of Fear. It was located in Jurassic Park.

Originally in 2002, when Cindy was planned to be the icon for the Halloween Horror Nights even that year, there would be a scarezone titled Jurassic Park. Universal would create an original tie-in story with the Jurassic Park film franchise for this scarezone and a haunted house located in the same area, in which a mad scientist named Dr. Burton mixed human and dinosaur DNA to create human-dinosaur hybrids. To help build the scarezone, Universal would use props from The Boneyard.

After Cindy was scrapped as the icon, the scarezone would be renamed into JP Extinction (which was the original name of the haunted house featured in this area). Other than the name change, the story of the scarezone and the scareactors would largely stay the same.

The power is out. The gates are down. Packs of carnivorous dinosaurs are loose in the park...and there's something very strange, very deadly stalking you as well!

Roaming the streets were various Dino-Men. Some were regular men with dinosaur heads and others were a complete fusion of the two. There were also people camouflaged with the surrounding plants and Velociraptor puppets.

Image from the now defunct HauntFreaks.com. 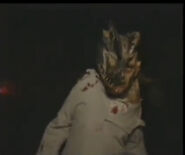 JP Extinction. Image from the Halloween Horror Nights: Islands of Fear website.
Add a photo to this gallery

Retrieved from "https://halloweenhorrornights.fandom.com/wiki/JP_Extinction?oldid=111753"
Community content is available under CC-BY-SA unless otherwise noted.