Hotel Hell was one of the three haunted houses that were featured during Halloween Horror Nights VII: Frightmares. It was located in Nazarman's.

Like the previous four years, Universal decided to put a haunted house behind some of the building facades in New York (called the Nazarman's area) for their 1997 Halloween Horror Nights event. In 1993, Universal built structures and alleys behind these facades specifically to hold haunted houses. This haunted house would be focused around a haunted hotel, with each room representing different areas of the hotel.

Check into one of the trendiest hotels in New York... at least, it was before it became the crumbling home to hostile ghosts, menacing phantoms, demented staff members and violent bums.

More than just the walls are falling down at the Hotel Hell. What was once one of the best hotels in New York City and today is not even its shadow, in the Hotel Hell today some terribly disturbing guests live. Calamities, murders and evil swarm within its walls - which seem to drip blood. If you enter the Hotel Hell you may never sleep well again.

Concept art reveals that one room, most likely the first entered, was the hotel reception. According to a comment on this video, there was a crazed bellhop staring at guests on the right through a sliding peephole in this room. There was a kitchen with a scareactor portraying a mad chef with blood-splattered clothes holding a bloody cleaver. This room was filled with hanging meat covered in plastic wrap to create a wet and slimy sensation.

In one room there was a bloody toilet on top of a tall pile of rubble spewing either water or blood. There was also a mirror room with a vague strobe effect containing a ghost-like scareactor.

Other rooms included guest rooms, a dining room, and a laundry room. This is unconfirmed, but the laundry room was said to have featured the Rat Lady in a sewage pipe. According to this, there was also a bartender impaled by many shards of glass and a drooling hotel guest that jumped out of an elevator. There was also the smell of Pine Sol in various rooms. Another room featured a one-armed butcher and a meat slice with mystery meat in it. 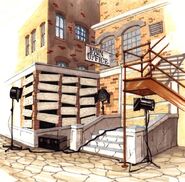 A picture of the concept art for the Hotel Hell facade. 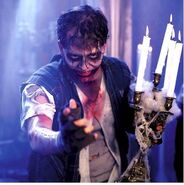 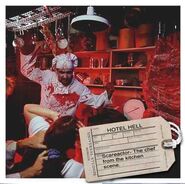 Image from the Halloween Horror Nights: Twenty Years of Fear website page.
Add a photo to this gallery

Retrieved from "https://halloweenhorrornights.fandom.com/wiki/Hotel_Hell?oldid=111861"
Community content is available under CC-BY-SA unless otherwise noted.