Horrorwood Die-In was one of the seven scarezones that were featured during Halloween Horror Nights: Ripped from the Silver Screen. It was located outside of Mel's Drive-In.

In 2009, Universal decided to have a scarezone based on creatures from a variety of different horror movies. Like The Skoolhouse from the year before, Horrorwood Die-In would build a giant structure, this time being a giant drive-in movie screen. It would also share part of its name with the very first scarezone at Halloween Horror Nights, Horrorwood.

A similar scarezone would appear in 2015 titled, All Nite Die-In: Double Feature.

The Hollywood Drive-in has been closed for years and some say the abandoned grounds are haunted, where late at night the dim flickering images of carnage and chaos, monsters and madmen leave the screen and enter the real world looking for fresh victims to star in their latest horrors.

There was a large drive-in screen in the area, which showed clips from various horror films as well as a sneak preview into The Wolfman.

Multiple scareactors would roam around and attack guests including: Norman Bates from Psycho, Regan MacNeil from The Exorcist, Man In Mask, Pin-Up Girl and Dollface from The Strangers, Pighead from SAW, a zombified Tony Montana from Scarface, The Thing from The Thing, and Kurt Barlow from Salem's Lot. 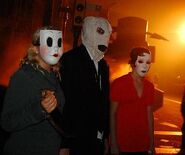 Retrieved from "https://halloweenhorrornights.fandom.com/wiki/Horrorwood_Die-In?oldid=52457"
Community content is available under CC-BY-SA unless otherwise noted.