Horror Nights: The Hallow'd Past was one of the eight haunted houses that were featured during Halloween Horror Nights: Twenty Years of Fear. It was located in the Parade Warehouse.

The S.S. Frightanic: Carnage Crew scene from this house also appeared in the Legend section in the interactive game, The Warehouse eXXperience which appeared on the Halloween Horror Nights website. The house would be located in a building called The Parade Warehouse. The Parade Warehouse was a very large warehouse built to hold the various parade floats used at Universal.

The house takes place within the confines of the Halloween Horror Nights prop warehouse, also featured in the commercial and promotional material for the event for the event, the Warehouse eXXperience, and the HHN: 20 Years of Fear scarezone.

Travel into a nightmarish realm where Horror Nights isn't just an event, but a reality.

Halloween Horror Nights-the name brings with it millions of tales, each filled with thousands of screams. Now, you have the opportunity to travel into a realm where Horror Nights isn't just an event, but a reality.

Guests enter the house under the guise of the Universal Prop Warehouse, and begin by browsing through a wide range of stored items in the warehouse from the past 19 years of Horror Nights, while overhead posters and banners bear roman numerals from I - XIX. As guests reach numeral XX, the warehouse takes on a mind of it's own, and leads you into a large open Lantern, revealing a Revolving Tunnel featuring images of Fear's minions; the past icons Jack the Clown, The Caretaker, The Director, The Storyteller and The Usher. As you exit the revolving tunnel, guests walk through some more of the prop storage space where they are attacked by some characters from the past.

You then enter a scene based on the Disorientorium house from Halloween Horror Nights XIV, where you walk through the Treaks and Foons' crazy mirror maze as they come up to and attack you. Guests then enter a scene based on the Scary Tales: Once Upon a Nightmare and Asylum in Wonderland attractions from Halloween Horror Nights: Reflections of Fear and see Alice savaging the recently dead corpse of The March Hare, as The Mad Hatter and The White Rabbit attack from different areas of the room. The next two rooms featured the zombies from Dead Exposure as guests walk down a long hall filled with flashing strobe lights and undead corpses, some of which are mannequins, and others being played by actors that try to attack you.

You then enter a scene from the S.S. Frightanic: Carnage Crew house from Halloween Horror Nights VIII, and see the undead Captain commanding the wheel of his ship as it begins to rock. Water pours across the windows, while the crew members of the ship attack throughout the scene. Following, is a scene taken from Body Collectors and Body Collectors: Collections of the Past, as you see the various body parts stored by The Gentlemen. Then as you wind the corner, you see one ripping a victim's spine out as other Gentlemen attack from different areas.

A statue of Eelmouth in front of what is most likely a Terra Cruentus sign.

A picture of the Bonechopper in front of a sign for Demon Cantina and a sign for Halloween Horror Nights XI.

Most likely a statue from The Thing: Assimilation.

Peter Peter Pumpkin Eater's Pumpkin in front of what is most likely the Halloween Horror Nights XI Midway of the Bizarre sign.

A coffin seen in Screamhouse: The Resurrection.

A picture of a zombie state (possibly from War of the Living Dead) next to a picture of Cindy Caine seen in Screamhouse: The Resurrection. Behind him is part of the gate for Shadybrook Rest Home used in Psycho Scareapy.

Billy the Doll from Dead Silence: The Curse of Mary Shaw.

The Rat Lady coffin as it appeared during Halloween Horror Nights: Islands of Fear.

A claw machine most likely used in Chucky: Friends til the End.

A dirty toilet most likely used in one of the Psycho Scareapy haunted houses.

The Elm Street sign used in A Nightmare on Elm Street: Dreamwalkers during Halloween Horror Nights: Carnival of Carnage.

Split-Faced Thing bust from The Thing: Assimilation, The Lord of Darkness head, and a Mummy headress.

A view of one of the hallways in the warehouse.

A picture of some of the icons used during Halloween Horror Nights: Sweet 16 behind a Mummy themed scareactor most likely used in the Nightmares on Parade.

Another Mummy prop most likely used during the Nightmares on Parade.

A bear from Scary Tales: Once Upon a Nightmare.

One of the scareactors used during Halloween Horror Nights XI.

The picture of the Fright Nights event guide cover.

A picture of a head that was on a fountain between 1991-2001 during Halloween Horror Nights. Below it is a poster from My Bloody Valentine 3D used in Silver Screams.

One of the Things from The Thing: Assimilation.

Chucky Dolls in front of pictures of Chucky and Tiffany.

Midway of the Bizarre sign most likely from Halloween Horror Nights XI.

A body used in Frankenstein: Creation of the Damned in front of signage from Insanity. To the right seems to be a Mummy.

Mary Shaw's tombstone and puppets from Dead Silence: The Curse of Mary Shaw.

Props from the SAW maze, including the Wilson Steel sign, the Pig Head mask, and the Venus Flytrap.

Most likely the Headless Horsemen from Scary Tales II

A picture of the Pig Head Henchmen from SAW.

A hot set sign used during the day to show regular park visitors that props used in scarezones are for Halloween Horror Nights.

Signage for Screamhouse: The Resurrection.

A closeup of The Bone Chopper.

Signage for The Dungeon of Terror: Retold.

Horror Nights: The Hallow'd Past cast 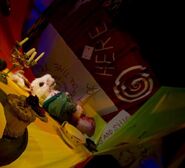 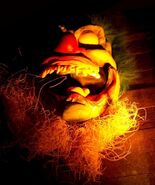 Retrieved from "https://halloweenhorrornights.fandom.com/wiki/Horror_Nights:_The_Hallow%27d_Past?oldid=117842"
Community content is available under CC-BY-SA unless otherwise noted.