Horror Comes Home was one of the four scarezones that were featured during Halloween Horror Nights: Sweet 16. It was located in Hollywood and was advertised as a walk down memory lane. At night, red fog covered area, as characters of the past attacked guests. Banners of the past 16 years adorned each lamppost. At night, four large fires were started, each with the faces of the four icons in them.

For their 2006 event, Universal would decide to have all of their and scarezones (and haunted houses) be sequels or prequels to landmark houses and scarezones in the past. The Horror Comes Home scarezone was different, in the fact that it would celebrate all of the past years of Halloween Horror Nights by having select scareactors from previous years appear in this scarezone.

The scarezone would be located in an area called Hollywood, an area of Universal Studios Florida located to the right of the park entrance. It is a recreation of the city of Hollywood (minus the famous sign).

Step into a surreal world of Horror Nights past and present. 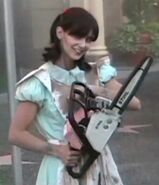 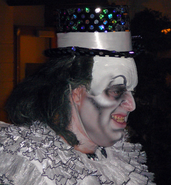 Add a photo to this gallery
Retrieved from "https://halloweenhorrornights.fandom.com/wiki/Horror_Comes_Home?oldid=52418"
Community content is available under CC-BY-SA unless otherwise noted.