Holidayz in Hell (Haunted Maze) was one of the ten haunted mazes that were featured during Halloween Horror Nights 2019 (Hollywood). It was located in the Parisian Courtyard.

What is supposed to be a time with friends, family and loved ones, the holidays have quite literally…gone to Hell! The terrors are far from limited to just Halloween. Prepare yourself for a sadistic experience involving a trip through a series of psychotic seasonal celebrations. Your creepy crawl through the year’s calendar is a true 365 day nightmare. After all, in our world…the scarier, the merrier!

As guests enter, they are greeted by an Undead Male Party Reveler (Or on some occasions an Undead Female Party Reveler) who is holding a martini glass in his hand and is standing in front of a giant martini glass with a skeleton inside. As guests continue, they enter a nursery filled with undead, crying babies, one of which is being cradled by a Nightmare Nurse brandishing a knife. Before the appearance of the nurse, Father Time can be seen overlooking the guests and nursery from behind a wall.

Guests proceed through a Tunnel of Love, where Cupids pop out from behind openings in walls brandishing knives. One Cupid is holding a woman (presumably a bridesmaid) at knife point. The woman is bound to a table, and can only cry out for help as the Cupid threatens her. To either side of the table, a bride and groom are bound to the walls, dead. As guests exit the Tunnel of Love, candy hearts adorn the walls with macabre messages written on them, like "Kill", "Kut Me" and "Dismember Me".

Leprechauns appear behind fences and speak constantly throughout the guests' procedure through the area, telling them that they will not steal their gold or "If it's gold ya want, gold ya shall get". At one point, a man, presumably a victim of the Leprechauns, can be found tied up inside the well, and will occasionally spit water, spraying any guests in front of him.

As a creepy nursery tune plays, a well can be seen with a person trapped inside when the guests first enter. Then, they will come across 4 giant Easter eggs, 1 containing a ravenous bunny, 1 with a Jack-O-Lantern face, one with human arms sticking out, and 1 where a beakless Peep pops out, accompanied by a chicken clucking. Then, the Easter Bunny pops out from behind a curtain, and after guests pass him, they come across children traumatized and being held captive by fairly normal-looking yet emptily-staring Easter Bunnies.

Uncle Sam can be found holding fireworks. As guests pass him, they come across a kid who as a result of a fireworks accident has lost his legs and half of his face. Towards the end of the area, Uncle Sam pops out at guests from their right.

Guests enter a large Jack-O-Lantern filled with pumpkinheads. Most of the pumpkinheads stand still, though some will come to life and lunge at guests.

Guests enter a dining room occupied by a dead family sitting at a table with a human cooked instead of a turkey. Turkey Lurkeys will come out lunging at the guests.

Guests are now outside in a Christmas Tree Lot, surrounded by trees decorated with intestines. Evil Santa pops out from behind an opening in a fence, accompanied by a demonic "Ho ho ho". As guests proceed onwards, they get greeted by Mrs. Claus, an elf, a nutcracker and a Snow Queen who patrol the area. The area is littered with presents and a macabre-looking snowman.

The Undead Male Party Reveler from New Year's Day can be found, along with Father Time as guests exit the maze. 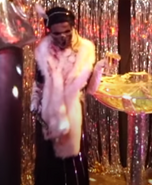 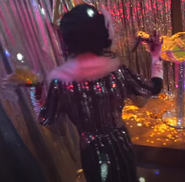 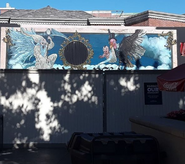 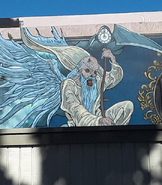 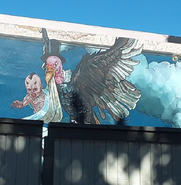 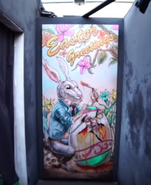 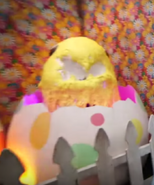 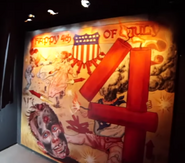 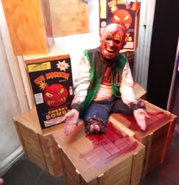 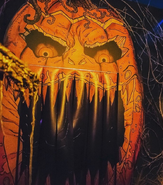 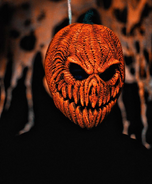 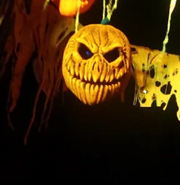 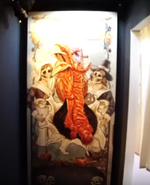 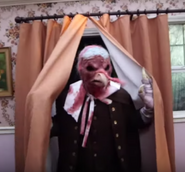 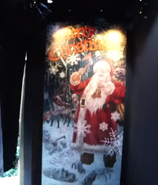 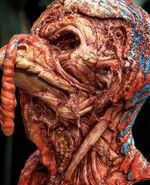 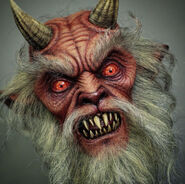 Image from John Murdy on Twitter.
Add a photo to this gallery

Retrieved from "https://halloweenhorrornights.fandom.com/wiki/Holidayz_in_Hell_(Haunted_Maze)?oldid=117277"
Community content is available under CC-BY-SA unless otherwise noted.