Hell's High was one of the five haunted houses that were featured during Halloween Horror Nights VIII: Primal Scream. It was located in Nazarman's.

The success of low budget horror movies and teen comedies at the time prompted Universal to create a haunted house that served as a mix of both genres. This haunted house was Hell's High and served as the only non-dual haunted house at the event in 1998. This was most likely due to the location of this house, which was behind the building facades in New York (called the Nazarman's area). Back in 1993, Universal built structures and alleyways behind these facades specifically for holding haunted houses. This haunted house location was much smaller than the Earthquake extended queue and Soundstage 22, so a dual house would not be able to fit in this location.

Go on location to a dilapidated high school where a scary new slasher film is being shot. Unfortunately, when the director yelled "cut", the film's villain took him literally. Now he's lose in the school, attacking all the other actors... and the film crew... and YOU!

The story was that there was a school where a slasher movie was being filmed, but the movie's villain and other actors were possessed by several murderers and started killing anyone who wandered onto the set for real after the director yelled "cut". The villain was Michael Krueger, a hybrid of Jason Voorhees and Freddy Krueger, sharing a name with Michael Myers.

Guests would enter the queue somewhere near the entrance to Sting Alley (near Kongfrontation). The queue would go down Sting Alley until eventually reaching the door to the house.

The facade was a banner hanging above Nazarman's saying "Universal Pictures Presents Hell's High. Now Shooting". There was also a poster for the movie on a brick wall, showing Michael Krueger holding a noose and a machete. He is standing in front of a fiery background where the words "Hell's High written". The tagline of the movie, "Schools out... Forever!, can also be seen on this poster. The line was pulsed, meaning they would only let a few people in at a time. On the door to the house, there was a sign in the shape of a clapboard, saying "Hot Set, Production in Progress".

Voiceover announcements and school bells would systematically play throughout the house. Concept art shows that one room was a cafeteria with Margot Spew, a crazed cafeteria lady serving glop. There were bloody body parts and organs on the tables, bugs crawling around, and a skeleton in a chair. She was covered in rotten-smelling mystery meat. There were also a gym equipment room containing a hanged body and a bag filled with body parts. The screams of nerds from within some of the bags could also be heard. One picture also suggests that there were scareactors hidden in lockers and sliding windows. There was also a "shop" scene that was hinted at in an article.

A nurse's office appeared with an evil nurse holding a syringe and a room featuring an evil gym coach also appeared. One account also said that evil substitute teachers also appeared in the house. There also was a science classroom reeking of formaldehyde with a voiceover detailing triggering "a wide variety of responses" in the brain using some unknown method. This room also had a table with skulls and jars, above which sat a collection of bones on the wall. There was also a dissected student on one of the lab tables.

According to this, a principal's office seen appeared in the house. In it, Michael Krueger swings a hatchet into the torso of a man tied to a table with chains (presumably the principal). The secretary could also be seen in this room with scissors in her eyes and something lodged down her throat. This scene led into the Girls Locker Room.

One room that can be seen in a video features a chainlink fence with the silhouette of a scareactor behind it (this could be a part of one of the rooms mentioned before). There was also a boiler room scene where guests would be attacked in a maze of pipes. As guests exited the house, they would be startled by a car (Christine from the Stephen King novel) blaring its horn. Going a little further outside, they would pass two Michael Kruegers, one holding a machete and another holding a meat cleaver. 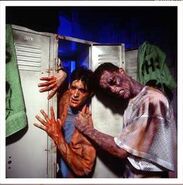 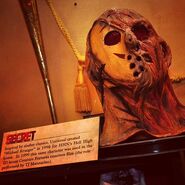 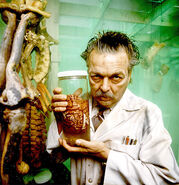 Mostl ikely the cafeteria scene with a scareactor on the left. Image from this video. 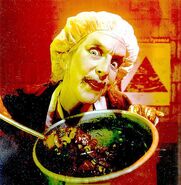 Both images from the Halloween Horror Nights: Sweet 16 website page.

Retrieved from "https://halloweenhorrornights.fandom.com/wiki/Hell%27s_High?oldid=117177"
Community content is available under CC-BY-SA unless otherwise noted.