Halloween Horror Nights X was the tenth annual Halloween Horror Nights   event in Orlando. The event was located at Universal Studios Florida. For the first time in its history, an original event icon, Jack the Clown, was created to be used in advertisements touting, "Not Afraid of the Dark? You Don't Know Jack!" The event featured five houses, four scarezones, two shows, two haunted rides, and a parade, and was held for 19 days in October 2000.

Halloween Horror Nights X was the first of the events to feature an original Icon. Jack, the evil clown, who took over the event and part of the theming was based on his character, including a haunted carnival and a scarezone taken over by other clowns. According to the event, Universal Studios brought some of the original pieces of Dr. Oddfellow's Carnival of Thrills to highlight the event. The Publicity and Marketing Department decided to play on the urban legend of Jack by being able to acquire the original box in which Jack was trapped. Jack appeared in the Jacked Up show and his house The Fearhouse.

If You Aren't Scared, You Don't Know Jack[edit | edit source]

October 6, 2000|By Jamie J. Anderson of The Sentinel Staff

After my interview with Jack -- the new Universal Halloween Horror Nights icon -- I think I deserve one of those tacky tourist shirts that reads, "I Survived Jack."

I have had my share of interesting interviews, but this one takes the cake. By far.

Before beginning the interview, I was warned of the clown's insane behavior and sometimes overbearing attitude.

"Be careful what you ask him," said Michael Roddy, manager of shows, scripts and designs at Universal Studios. "Whatever you do, don't call him cute, touch his nose or turn your back on him. Be sure to keep fingers out of his reach; the last journalist who interviewed him is now called Lefty. Jack thinks journalists taste like chicken."

During the 10th anniversary of Halloween Horror Nights, visitors will encounter Jack as well as several of his "undead" zombie friends throughout the park and inside the five mazes, including the evil Dr. Rich Oddfellow's Fearhouse.

Although I survived my run-in with Jack, I'm wondering if you'll be so lucky after a visit to Halloween Horror Nights X.

Jamie Anderson: So, Jack, what brings you to Universal?

Jack the Clown: It's a painful story for me, Jamie. You start off right away with that after I agree to talk to you and compliment you. I thought we were friends. To tell you the truth, it's an urban legend. You see, Jamie. May I call you Jamie?

JC: You see, Jamie, legend has it -- the urban legend -- which always sounds like you're throwing up. An uuuuurrrban legend. An uuuuuuurrrrrrrban legend. I have a little affinity for a certain delicacy, you might say. Parts and pieces of people -- no particular people, just people. I had a small incident -- a string of incidents, you might say -- when I got hungry. People were starting to know about these incidents, so I went to Dr. Rich Oddfellow and asked for help. I wanted him to hide me or transform me into a different freak. But he wouldn't help me at all. Instead, he killed me. How's that for friendship? You wouldn't do that to a friend, would you? You wouldn't do that to me, would you?

JC: That's where we differ. You're so beautiful and sweet. Well, in any case, he stuck me and my friends in a box and made us part of the show. We were rediscovered in 1980 by a British broadcaster doing some special on the dark rides of America, some BBC thing. Out I popped and I was free. They had found me and found my friends -- the ones I had made a part of me. That's really how you get close to people, really close to them . . . if you know what I mean? We were found, and the dark ride was chucked. The bodies were taken in separate carts. And my ambulance driver, shall we say, had a slight accident. We had a slight problem when we were going around one of the corners. He had a little bit of a coronary, you might say, because there was a problem with one of the corpses that wasn't dead yet. As for the BBC journalists, I have such an affinity for journalists.

JC: They were found dead. Pieces missing. One leg was missing and two eyes. And they never found the body of Jack the Clown. The people at Universal went around asking people and bought the boxes that I had stored the bodies in that spelled out the letters J-A-C-

JC: Yes, K, ha ha. You like that one? It's you and me all together, wrapped up in a basket. Well, Universal has used this urban legend to sell tickets. It's a good trade for both of us really. They get more people in the park, and I get more friends to play with, like you. So, you like this whole journalist thing, huh? What is your most interesting story.

JA: I would say I'm probably doing that now.

JC: So, you say I'm the most interesting.

JC: Do you want to play?

JA: No, that's OK. So, what type of impact do you hope to have on people at Universal?

JA: You want people to be scared of you?

JC: You're not listening to me, are you? Oh, oh, get the clown out here to spill his guts and then you don't even listen.

JA: No, I wanted to make sure I had it right. I wouldn't want to be wrong about something like that.

JC: No, I wouldn't want you to be wrong either. That would look bad. That would be bad for your career.

JA: So, what are you going to do when you're done at Universal?

JA: What will JC: Oh, I'm not done. I will be here. Universal thinks that Halloween will be done at the end of the month, but I have another plan. I'm going to stay and maybe put on an E.T. head. I can do my own thing. I can go out to the Beetlejuice show and be one of the monsters they have singing and dancing out there. When the people come back with their autographs books and candy-stained faces, we'll chat.

JA: What will you chat about?

JC: Well, I will open my mouth and words will come out like "Mmmmm" and "Ahhhhhh."

JA: So, how do you hope to scare people?

JC: Completely, to the very core of their bones. In every manner. Everything is planned for Halloween. No matter what you come to see, I will be there to scare you. If you go to see Terminator 2, I'll be there. I will be everywhere. So complete is the frightful experience this year that not only will people be completely frightened in the houses, they'll be completely frightened in between and even during the parade -- with my bloody playthings.

JC: Yes, it's a whole bunch of different objects I've found useful over my career as a clown.

JA: So, what do you want the people of Orlando to know about you to bring them closer to the real Jack?

JC: I want them to know I'm perfectly harmless. Clowns are nice. Benevolent. Magnificent. We only want to meet them. We only want to see their bright, shining, fat, tasty faces here at Universal. Will you tell them?

JC: That's why I love you. That would be delicious. You won't let me down?

JC: And then you'll come back?

JC: And I will let you know that when you do come back, I will find you to thank you personally. Hhhheeehhhheeeee. 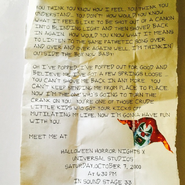 Image from James Keaton on Twitter.
Add a photo to this gallery 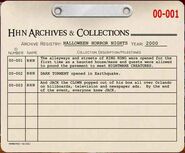 A picture of the Halloween Horror Nights X map.

The 2000 drawer after the icons added their notes.

The 2000 news article with notes from Jack. 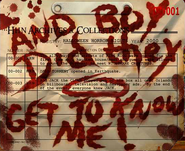 The 2000 archive registry with notes from Jack.

Halloween horror nights
From the Halloween Horror Nights: Sweet 16 website.
Add a photo to this gallery 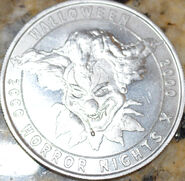 The front of one of the coins that they threw out of the parade floats. 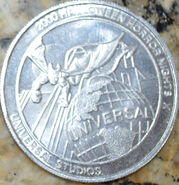 The back of one of the coins that they threw out of the parade floats. 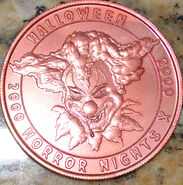 The back of another one of the coins that they threw out of the parade floats. 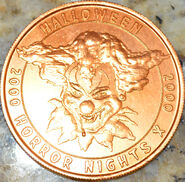 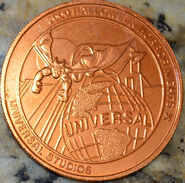 The front of the black main event shirt. 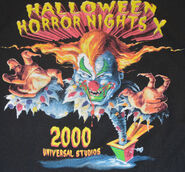 The back of the black main event shirt.

HHN X Sweater [From HorrorUnearthed]
Add a photo to this gallery

Retrieved from "https://halloweenhorrornights.fandom.com/wiki/Halloween_Horror_Nights_X?oldid=117485"
Community content is available under CC-BY-SA unless otherwise noted.