ORLANDO, Fla., Oct. 6 /PRNewswire/ -- This Halloween, it's back to school for those who dare at Universal Studios Florida during the eighth annual Halloween Horror Nights celebration which runs this year for a record-breaking 19 nights beginning October 2 and continuing on October 3, 8-10, 15-18, 21-25, and 27-31.

Brave guests are registering for Fear 101 at Hell's High, one of five new, haunted mazes where substitute teachers from the beyond haunt the hallowed halls, a crazed cafeteria lady cooks up the ultimate mystery meat and the sadistic gym coach takes the phrase "no pain, no gain" much too seriously.

During the day guests can enjoy more than 40 rides, attractions and shows, but once night falls, the park is transformed into the most vivid of nightmares. With fear in their hearts, guests will make their way through a total of five haunted mazes, three terrifying stage shows and the most disturbing Festival of the Dead Parade ever.

* S.S. Frightanic. Escape from it all on the S. S. Frightanic. Guests will experience a not-so-relaxing trip on a ghost ship full of upper-class ghouls in first class, or encounter a most frightfully gruesome group hiding within the lower decks.

* Festival of the Dead Parade. It's a celebration of the dark side when hundreds of ghouls, zombies and whimsically wicked creatures march through the streets of Universal with new, themed floats in a tribute to fear.

* Shows. There will be three original shows including: Horrorpalooza, a main-stage show full of hair-raising performance, and the traditional Bill and Ted's Excellent Halloween Adventure VII. There will also be a fogged Midway of the Bizarre, where guests can try their hand at side-show games while avoiding the bizarre creatures that inhabit the area.

* Lynyrd Skynyrd Concert. Guests will be able to rock to classic favorites like "Sweet Home Alabama" and "Free Bird" on October 18 when Lynyrd Skynyrd performs with opening acts Peter Frampton and Tommy Shaw. This concert is provided with no additional charge to the Halloween Horror Nights ticket price.

Image from this video 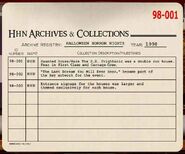 A picture of the Halloween Horror Nights VIII brochure. 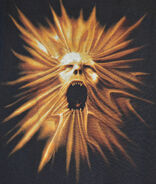 The front of the main event shirt. 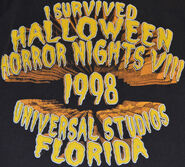 The back of the main event shirt.

One of the media gifts that they gave out during Halloween Horror Nights VIII. 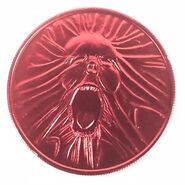 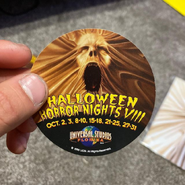 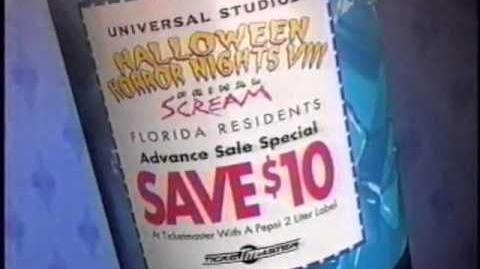