In Park Upgrade with Hertz Discount: $17.95 + tax (and Daytime Admission)

By day, John McVay is a carpenter and painter; by night, he is a butcher in Hell's Kitchen.

McVay is one of approximately 250 "scaracters" hired to take part in Halloween Horror Nights '94 at Universal Studios Florida, which gears up tonight at 7 and will continue weekends through Halloween night.

This fourth installment will include such favorites as Rat Lady, Psycho Path, Robosaurus, Bill & Ted's Excellent Halloween Adventure III and street entertainment. New this year will be Dungeon of Terror (featuring Rat Lady and Snake Master), Boneyard (a recently excavated insane asylum), Price Is Fright (a game-show spoof hosted by Beetlejuice) and Hell's Kitchen (a deserted warehouse with dismembered bodies and a hunchback butcher).

"It's right up my alley," said McVay, a 44-year-old resident of Winter Park who considers himself a performer by trade.

Then, like the 50 or so other students attending a Ghoul School orientation Oct. 6, McVay promptly stood up, assembled himself in a frightening pose and joined in reciting the pledge of allegiance.

"I pledge allegiance to the hag... and to the mayhem for which she stands... "

Among the usual housekeeping items on the agenda - costume and makeup etiquette being the most prominent - the soon-to-be ghouls and goblins were given further instructions by head mistress Julie Zimmerman to scare "especially young children who cannot distinguish fantasy from reality."

The reaction Zimmerman received was not unlike the rowdy cheers of high school students at a homecoming pep rally.

"Being dead has never been so much fun!" Zimmerman declared.

Jim and Debbie Klingensmith can attest to that. This is the third year the Kissimmee couple has been proclaimed dead.

"It's become a tradition," said 50-year-old Jim Zimmerman, to which his wife added, "Each year gets better."

The Zimmermans sell time-share for a living and said that they wouldn't be able to afford to work for standard wages full time, but they get a kick out of working part time during Halloween Horror Nights.

"I'd do it for free!" said Debbie Zimmerman - this after relating how she had once had beer thrown in her face. The petite 37-year-old explained, "It's a fright reaction; it's never bothered me."

Judging from the enthusiastic responses to the orientation skits, there doesn't seem to be much that could daunt this crowd - not snakes or rats or even roaches. And these aren't your ordinary palmetto bugs - these suckers are 2- to 3-inch Madagascar roaches with hard shells. Oh, and they hiss too.

"I'm a postal worker for the city of Orlando, which makes me partially demented to begin with," said Mick Pless, one of the two men who will be covered with the creepy-crawlers.

Universal Studios public relations representative Amy Moynihan said that hundreds of responses are received each year requesting to be crawled on or slithered across. She explained that all of the creatures are guaranteed to be disease-free because they come straight from laboratories or are raised from birth especially for Halloween Horror Nights.

"The rats (of Rat Lady fame) go for pets (when Horror Nights is over). They're adopted by employees and their friends," Moynihan said.

The orientation wrapped up with a graduation speech given by Zimmerman, peppered with over-exaggerated boo-hoos and sniffles provided by the audience.

Here, performers are coached on pinning down the most effective guttural moans and high-pitched shrieks to shower upon guests as they walk through a graveyard, a kitchen strewn with bloody body parts and a dingy attic. Once again, special instructions are given.

"Try to go for women; you get the best scares," performance coach Rob Anderson advised.

Being able to get away with scaring people is the reason 18-year-old Angie Rivera gave for applying for the job in the first place.

But, McVay probably summed up the general consensus best when he said, "I'm here to create hell and have fun!"

☀"The lights were red and green, some flickered and some were off entirely. There were sounds of crunching bones and fiendish laughter from darkened doorways. Every so often a howl would be heard in the distance. A sinister soundtrack underscored all these sounds, sometimes loud enough to startle, sometimes almost gone...all the better for the sudden screams from the other side of the walls. Oh, and let's not forget the body parts hanging from the trees!

I think I read somewhere that this was the first year USF used scarezones. I'm glad this was my first year, too, then, because I can't imagine HHN without them. In fact, they are why I fell in love with the event. I loved that the entire park was done, not just a section or two, or just the paths to the houses. You didn't know where something spooky would be hiding, what you would hear or see when you rounded a corner. It was grand, just grand."

Going with the theme you mentioned above, in NY they had scareactors pushing shopping carts fill fo bones and just as they got close enough to you another scareactor would jump out from inside the cart. Oh, the good old days.- katzmeow44 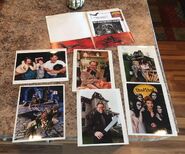 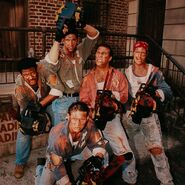 Image from HHN Orlando on Twitter.
Add a photo to this gallery 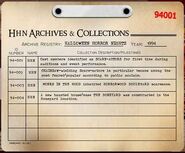 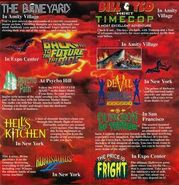 A picture of the Halloween Horror Nights IV brochure.

A picture of the Halloween Horror Nights IV map.

The 1994 news article with notes from Jack the Clown.

The 1994 archive registry with notes from Jack the Clown.

Audio that played on the 1994 archive drawer from the Halloween Horror Nights: Sweet 16 website when the book was clicked on before the icons made their edits:

Audio that played on the 1994 archive drawer from the Halloween Horror Nights: Sweet 16 website when the book was clicked on after the icons made their edits:

Retrieved from "https://halloweenhorrornights.fandom.com/wiki/Halloween_Horror_Nights_IV?oldid=120859"
Community content is available under CC-BY-SA unless otherwise noted.