The event was the first to feature the annual "Bill and Ted's Excellent Halloween Adventure". The event, which featured two haunted houses, five shows, and four haunted attractions, was held for five nights in October 1992. The reported budget was one million dollars. The event also took three months to plan and there were a little over 300 scareactors.

UNIVERSAL STUDIOS FLORIDA BRINGS CLASSIC MONSTERS TO LIFE DURING 'HALLOWEEN HORROR NIGHTS' ORLANDO, Fla., Oct. 8 /PRNewswire/ -- Universal Studios Florida gives life to the greatest horror films of all time this October when its second annual "spooktakular" Halloween party, "Halloween Horror Nights," grips Orlando. Last year, terrified crowds screamed for more and this year they get it...more ghouls, more gore, more tortured zombies and more days to party. A million dollar transformation of the famed rides, sets and soundstages creates terrifying mazes of horror and mystery. From mayhem to the macabre, it's guaranteed to scare the yell out of daring guests and set the stage for the country's most "terrorific" Halloween celebration. "Halloween Horror Nights," with cinema's most feared monsters, terrifying torture traps and frightful monster mash dances will unfold two consecutive weekends Friday and Saturday/Oct. 23 and 24 and the following Thursday, Friday and Saturday/October 29, 30, 31 (Halloween) from 6:30 p.m. to midnight. Mortals meet the immortal in "The Dungeon of Terror"...a haunting and shocking maze of madness peppered with tortured screams wrought by chainsaw-menacing maniacs, deadly druids, vicious vampires and crawling vermin. Last year, a major Florida daily newspaper columnist called the Dungeon "absolutely the most terrifying haunted house (he's) ever ventured into," and awarded it a "five chainsaw rating." This year, guests will enter...but possibly never leave a giant 16,000-square-foot soundstage laden with oozing coffins, torn torsos and eyeless victims that recreates the set the Universal film "The People Under the Stairs." The tormented strange inhabitants literally have people over for dinner. All who enter relive the skin-crawling claustrophobia of the film as their hauntingly eerie journey leads them into darkness and on an insane encounter with the resident mutants who bleed on visitors. But there's no escape for some who become trapped inside the walls and under the stairs, where specters from a violent past dwell. The Psycho House will provide a chilling, "behind the screams" backdrop for guests who risk taking their photo side-by-side diabolical monsters and frenzied zombies...and maybe meeting Mother on a frighteningly up-close and personal basis. And a hyped-up version of "Beetlejuice's Graveyard Revue" starring the legendary Universal Monsters, will fill the air with pyrotechnics and raucous rock 'n roll. "Robosaurus," a huge fire-breathing, car-crushing monster standing four stories tall and weighing 30 tons, will terrorize guests three times nightly. Shooting 40-foot streaks of fire from his mechanical mouth, Robosaurus lifts vehicles high in the air in a car-crushing mechanical claw and tauntingly prompts a blazing battle with police and army vehicles. Bill & Ted, time travelers extraordinaire, party on with guests as they trick or treat through time at the Wild, Wild, Wild West show arena in the all-new "Bill & Ted's Excellent Halloween Adventure." Starring in an action-packed production of daring stunts and thrilling special effects, the bodacious buddies travel through time in their phone booth and find themselves in the middle of a most heinous "Western shoot-out." The show culminates in the greatest rock 'n roll hits of all time, creating a Halloween Adventure guests will never forget. The popular "Thunderdome" returns in '92, with the queen of darkness and her henchmen scouting the Hollywood Boulevard audience for "spies." Unsuspecting guests are wrenched from the crowd, locked in body-sized cages and lowered into an acid-bubbling vat, only to be reclaimed as skeletal remains. Dazzling special effects transform even the most skeptical into believers. Universal's Animal Actors Stage becomes a spirited world of shadows, darkness and danger as world famous master illusionists, The Pendragons, reappear for an encore performance. The Pendragons will spellbind audiences with their mystifying magic of the macabre, shattering mortal expectations and the laws of nature by making the impossible possible. In addition, hundreds of roaming mutants, misfits, maniacs and other creatures of darkness will lurk among unsuspecting mortals as Universal Studios Florida transforms its sets and soundstages into the most terrifying Halloween party ever produced. The New York, San Francisco and Amity street sets will become the "Midway of the Bizarre," filled with the strangest collection of bizarre "talent" ever presented, including "Dragon Breath," "Blade Walker," "Hell Cats," "Bone Bender," "The Hex Maniac," "The Misfortune Tellers," "The Grand Illusion" and "The Incinerator." Even the major rides will be diabolically redesigned, flaunting menacing monikers such as "Voyage of the Unknown," "Tramway of Doom," "Terror Underground," "Alien Forest" and "Gozer's Revenge." Guests who have survived the wretched mayhem, graphic gore, bloodied bodies, frantic freaks and vicious vampires can rock till they drop and kick up their heels at the Rock Inferno Monster Mash, featuring DJs, VJs, screamin' demons and a giant video wall. And on the 29th, 30th, and 31st, rabble-rousers can party with the most famous Wolfman of all...Wolfman Jack, who will host the musical festivities.

Scare Up a Good Time at Universal[edit | edit source]


With more than 100 ghouls roaming the park and a 40-foot-tall, fire-breathing, car-crushing Robosaurus stalking the back lot, the Halloween Horror Nights at Universal Studios Florida in Orlando promises to scare the yell out of you.

The theme park has invested more than $1 million in decorations, costumes and special effects for a real monster mash on two consecutive weekends.

This is the second year Universal has held a Halloween bash.

Universal officials say the idea grew out of the fact that Universal Studios created many of the classic horror films such as "Dracula," "Frankenstein," "The Mummy" and "The Wolfman."

Last year's event was so popular that Universal extended the number of nights and will introduce a similar Halloween party at its California park.

Halloween project director Tony Peugh says the park has been working more than three months on the horror night effects. More than 300 performers have been cast as monsters, ghouls and street entertainers just for the event.

He says that at twilight each day, the park will shut down and be transformed into monster central.

A new attraction this year will be Robosaurus, a 30-ton, robotic dinosaur that was constructed for the 1991 TV movie "Steel Justice."

Universal Television had hoped it would become a weekly TV series. When it failed to get on the NBC schedule, Robosaurus started making the rounds at tractor pulls and car shows.

Powered by a 450 horsepower diesel engine, the four-story creature throws out a 40-foot flame as it lifts and crushes automobiles.

Robosaurus will be attacking cars and fighting off stunt crews on the New York streets in three shows each night. "Counting rehearsals, we'll have destroyed 17 cars before its over," Peugh said.

Other special Halloween attractions include: The Dungeon of Terror, a haunted house featuring vampires, crawling vermin and chain-saw maniacs; "The People Under the Stairs" exhibit, a 16,000-square-foot sound stage converted to a house of horrors based on a Universal horror film; and Bill & Ted's Excellent Halloween Adventure, a horror/comedy stunt show.

Also featured: The Pendragons, professional illusionists performing on stage; a street show based on the science-fiction film "Mad Max Beyond Thunderdome"; and a monster rock 'n' roll show. 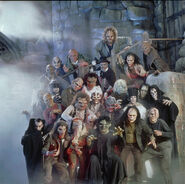 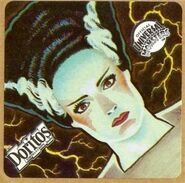 The map for this year.

Image from Sean Corey Adams.
Add a photo to this gallery 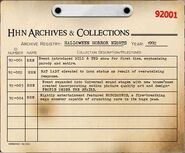 The 1992 drawer after the icons added their "notes".

The 1992 news article with The Caretaker's "notes". 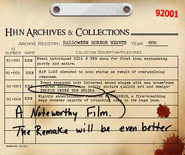 The 1992 archive registry with The Director's "notes".

Despite referring to 1992, the image is actually that of Bill & Ted in 2001.
Add a photo to this gallery

Audio that played on the 1992 archive drawer from the Halloween Horror Nights: Sweet 16 website when the book was clicked on: 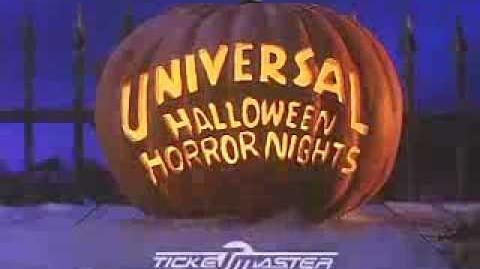 Retrieved from "https://halloweenhorrornights.fandom.com/wiki/Halloween_Horror_Nights_II_(Orlando)?oldid=117066"
Community content is available under CC-BY-SA unless otherwise noted.