Yep, it's Halloween time again, and Universal Studios-Florida is all geared up for the holiday. The 444-acre backlot of the studio has been transformed for its annual " Halloween Horror Nights " event continuing today and next Friday, Oct. 29 through Sunday, Oct. 31. Hours are 6:30 p.m.-midnight each night and you get access to all the park's normal rides.

In keeping with the park's "ride the movies" motto, many of the attractions designed to scare the pants off of guests have been inspired by recent or popular films. For instance, there's Bill and Ted's Excellent Halloween Adventure, a stunt show filled with special effects, and the Psycho Path Maze, a labyrinth into the world of the Bates Motel from Alfred Hitchcock's Psycho.

"In terms of our haunted houses," said John Paul Guertz, the event's artistic director, "we've created some really dramatic situations that people can find themselves walking intoand our haunted houses are definitely more upscale than your neighborhood haunted house."

"People come to see our haunted house attractions, but we try to make the most out of our streets with roaming characters," said Guertz. "People feel very comfortable out on the streets and then suddenly one of the characters leaps out and scares the heck out of them. There's something lurking for guests around every corner."

Robosaurus - a four-story, 30-ton car-crushing and fire-breathing dinosaur with an attitude that terrorizes Metropolis.

The Slaughterhouse - a mutant/monster-filled maze through a vacant warehouse.

People Under The Stairs - a 16,000-square foot haunted soundstage based on the movie of the same name.

The Rat Lady - an occupied coffin with a live resident surrounded by live rats.

The Roach Rangler - much the same as Rat Lady, but with roaches.

Midway of the Bizarre - Roaming live acts with a decidedly Halloween bent. They include a sword swallower, a fire-eating contortionist, the Chain Saw Drill Team and the Dead High School Cheerleading Squad.

In search of new ideas and unusual acts, Guertz and design partner Julie Zimmerman visited several cities across the country, including Los Angeles and New Orleans. Only half of the Horror Night performers are year-long employees of the park. Their search has netted some unusual talent for the other 50 percent of the performers, said Guertz, including the popular Rat Lady.

"Our Rat Ladies have really taken a liking to their job," said Guertz. "Rat Madames" Stacey L. Virta and Catherine Greenlief, he adds, "have even put together a Rat Lady Manual" to help others play the role. Some of the four-page manual's tips include:

Before the show: "You are encouraged to get to know the rats on a daily basis - (by) arriving early before the show, or stopping by during the week. The only way you can get to know your rats better is to show you care." (For the record, 500 applicants applied for this job.)

In the coffin: "Aussie Scrunch hair spray works best. . .this brand keeps the rats coming back." Also, "it's a good idea to keep rat food or treats handy during performances in case the rats get the munchies."

Punching a clock is never easy for monsters.

universal Says… BOO! – The Theme Park Pulls Out All The Stops for Halloween[edit | edit source]


Universal Studios Florida's Halloween Horror Nights is a delightfully scary symphony of things that go bump in the night.

The crash of the attic door slamming shut, the clatter of a shutter banging against the house, the scrape of a tree branch against the window - has been orchestrated by a creative and technical team that works year-round preparing to throw a fiendish shroud over the 444-acre theme park.

The transformation from warm and fuzzy theme park to Halloweenland means that parking-lot attendants will be costumed, ghoulish characters will stroll the boulevards, vampires will lurk around every corner - even the street lamps will cast an eerie glow with special orange bulbs.

Expect the unexpected, say the creative forces behind Horror Nights.

"People always walk through the back lots and rattle the doors on the facades to see if they open," said creative director Julie Zimmerman. "Normally, they don't. Well, during Halloween, they do."

But the main draw for most visitors will be the three haunted houses - Psycho Path Maze, Slaughterhouse and People Under the Stairs.

Universal's Halloween creative team has designed dozens of terror-filled vignettes for the houses, each lasting no longer than five seconds, and strung them together so tightly that 2,000 people an hour will view them.

Each frightening scene must be engineered so it propels the guests immediately into the next one, like a pinball machine from hell.

"Designing a haunted house turns into math, eventually," said John Paul Geurtz, Horror Nights' artistic director. "You have to calculate each step people will take and engineer their every move. There's nothing random about this."

Behind all the engineering, though, is the simple desire to scare people. And Universal's Halloween Horror Nights aims to tap into the familiar fears of childhood rather than the violence that is so often associated with horror movies today.

"We're not into the gore factor as much as we're into taking people on a psychological trip," Zimmerman said. "We really talked a lot about our childhood fears."

Psycho Path Maze is based on the classic Alfred Hitchcock movie - with visitors checking into the Bates Motel.

"We take you into a black-and-white movie through the mind of Norman Bates," Thyne said.

Although the gore factor has been toned down this year, some pretty grisly inhabitants call the walk-in coolers of Slaughterhouse home. Unsuspecting guests take a trip through the meatpacking district of New York as mutants grab at them around every corner.

And that ain't just beef on those meat hooks.

"We do have bodies that hang or dunk or drape or spew," Geurtz said, "but we also use a lot of humor and a lot of subtle scares."

People Under the Stairs is truly a haunted house, each room familiar yet spooky - a bare light bulb illuminates the ghostly attic, creatures lurk underneath the stairs and roaches scurry through the kitchen.

"We like to tap into subtle, familiar fears," said Jerry Abercrombie, Universal's props manager. "The attics, the basements, the closets . . . the things you know you shouldn't be afraid of, but you are."

Universal's team recognizes the need for relaxation to balance the adrenaline rush that accompanies a tour through the haunted houses, so the evening is interspersed with healthy doses of comic relief, like the Chain Saw Drill Team, a crew of five chain-saw-toting monsters who twirl their motorized saws like crack Marines. The Dead High School Cheerleading Squad, killed in a car crash on their way to the big game, wander the streets, singed pom-pons in hand. And traveling salesmen Burn and Bu ry will be busy selling cemetery plots and cremation services.

Additionally, Universal's regular attractions, such as Jaws, Back to the Future and Kongfrontation, will be operating.

The third annual Halloween Horror Nights has been expanded in size and scope from last year's two weekends to this year's three, much to the delight of the Halloween mavens at Universal.

"The point between screaming and laughing is like this," Zimmerman said, gesturing a minuscule distance with her thumb and forefinger. "People love to be scared as much as they love to laugh. We all need to get that out, to scream and yell and do all the things we can't normally do." 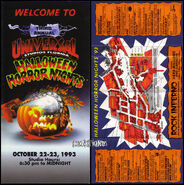 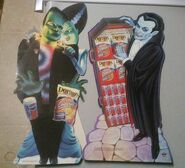 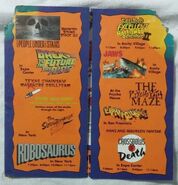 The map for this year. 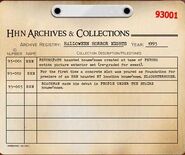 1993 drawer after the icons add their notes. 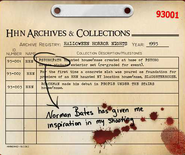 1993 archive registry with notes from The Director.
Add a photo to this gallery

Retrieved from "https://halloweenhorrornights.fandom.com/wiki/Halloween_Horror_Nights_III_(Orlando)?oldid=122516"
Community content is available under CC-BY-SA unless otherwise noted.