Jigsaw and the movie murderers request that you arrive early. You know how it goes, the early bird gets the chainsaw."

Jigsaw was the main villain, with the thematics being that all the mazes and scarezones were all part of Jigsaw's movie-centric game.

Jigsaw (Represented by Billy)- There were multiple men and women who fashioned themselves the moniker of “Jigsaw Killers”. The first one genuinely believed that putting his guests through a life or death situation would cure them- but the others put it to far more worse standards. Whoever this Jigsaw is, he helmed this Halloween Horror Nights, with his game centering on movies.

Charles Lee Ray- Like many supernatural slashers, this one had a pretty tough childhood which led to him becoming a pretty nasty person in both his human life and his later life as a killer doll. Eager to kill many victims, he was elated when Jigsaw tore him out of the screen and into his ”game” where he took over the House of Horrors. 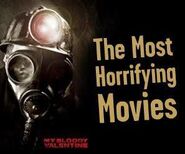 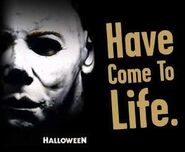 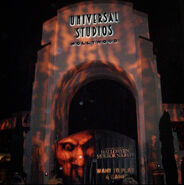 Credit to: adventures_in_the_everyday on Instagram
Add a photo to this gallery

Halloween Horror Nights at Universal Studios Hollywood
Add a photo to this gallery
Retrieved from "https://halloweenhorrornights.fandom.com/wiki/Halloween_Horror_Nights_2009_(Hollywood)?oldid=116014"
Community content is available under CC-BY-SA unless otherwise noted.