"There are some places where evil is born, and others that were born evil. The Bates Motel, Camp Crystal Lake, The Hewitt House, 1428 Elm Street. It's scary enough that Jack Schmidt believed these places were real. What would be even scarier...."

"It's October and Halloween is closer than you think. Freddy, Jason, and Leatherface are waiting for you at Jack's carnival. Are you ready?"

Halloween Horror Nights 2007 took place at Universal Studios Hollywood. This year, Ringmaster Jack (Schmidt) brought forth the Carnage Killers (Freddy Krueger, Jason Voorhees and Leatherface) to assist him in his destruction on the Universal Backlot. While Jack was the main antagonist of the story, it is uncertain whether to count the clown as an Icon as he didn't appear in most of the adverts. Instead, The Carnage Killers took center stage.

This was the first year that Universal Studios Hollywood and Universal Studios Florida used the same thematic- that the event took place in Jack's sick and demented carnival- although the theming was not as prevalent in Hollywood. This was also the last year an Icon from Orlando was borrowed (Creative Director John Murdy didn't want to continue using original characters that he didn't create).

"There was one man in particular, who took his obsession with these films a bit too far. His name was Jack."

It has been debated whether violence in horror films can induce violent behavior in others. That's where the clown comes in.

On October 31 2006, during Pavel Pranevsky's assault on the backlot, a man in clown makeup and a garish outfit was arrested for stabbing attendees of a movie theater in Universal Studios Hollywood. He was deemed insane and sent into an asylum called Shadybrook.

The man was identified as Jack Schmidt, although not much was known about his past. He told facts about himself to an unknown psychologist. He was a horror fan who particularly aspired the films of A Nightmare on Elm Street, Friday the 13th, and The Texas Chainsaw Massacre; their villains in particular; and took it upon himself to follow in the footsteps of these veritable slashers. To him, everyday was Halloween, a day to embrace the inner demons of mankind and unleash terror upon the stars.

Eventually he broke out of his cell and murdered a guard, and broke out of Shadybrook Asylum. Eventually, his psychologist was sent postcards from his former mental patient, which were "taken" from the places of the Bates Motel, Camp Crystal Lake, 1428 Elm Street, and the Hewitt House. The psychologist was able to piece together the psychopath's plan: to take guests into these realms and come face to face with these slashers.

Jack believed that the very essence of fright and barbarity was conceived by a place where movies are made: The Universal Backlot. For you see, Universal, while not creating the horror genre by itself, has created the horror movie genre, as The Phantom, Frankenstein, The Mummy, and etc. were both the first movies of horror and their monsters the earliest of movie terrors.

Seeing this has a way to gain power of the darkness, Jack announced that he would be holding a "Carnival" that would take place at Universal Studios Hollywood and the "Hacklot". As The Ringmaster for this psychotic fair, he would bring forth his childhood heroes, The Carnage Killers, consisting of the Sensational Slasher Artist, the Masked Master of the Machete, and the Chainsaw Wizard, as the "main attractions", as well as various other freaks like him as "Freakshows" who would show guests the horrors of The Big Top. In spite of the threat, Universal didn't take his warnings too seriously, much to the chagrin of his psychologist.

This was a huge mistake: somehow Ringmaster Jack managed to bring his favorite "heroes" to life, and together they would stand tall among the children of the night as they wreaked devastation on Universal, transformed to The Carnival of Carnage.

Despite being the main antagonist, Jack Schmidt/The Ringmaster surprisingly didn't appear in a lot of the marketing materials, aside from some print media. Much of the marketing revolved around the Carnage Killers, Freddy, Jason, and Leatherface.

Much of the marketing was reused from Orlando's at the time, which revolved around an decrepit, evil carnival. Freddy, Jason, and Leatherface were usually seen together; although some posters showed a specific slasher separately (Jack also got one). The carnival freak names (Machete Master) were also borrowed from its sister event/carnival.

The commercial was the same one used at Orlando, directed by Dean Karr. It showed a man wandering around a gloomy carnival, entering a fortune teller's tent. The fortune teller showed cards of the Carnage Killers, only to reveal himself as Ringmaster Jack. The mental patient then summoned Freddy and Jason to lunge at him, and the end showed Leatherface tearing the man with his chainsaw while Jack Schmidt laughed maniacally.

While not as high-themed as Orlando, the theme of the event was that all the mazes, scarezones, and shows were part of Jack's carnival. 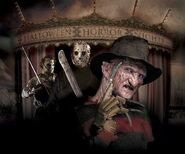 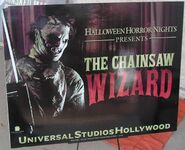 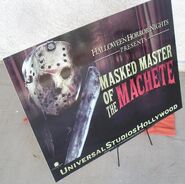 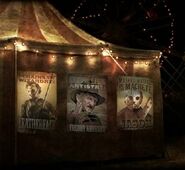 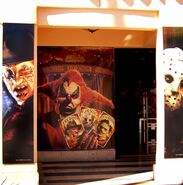 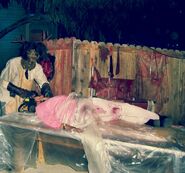 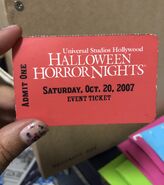 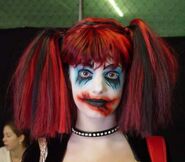 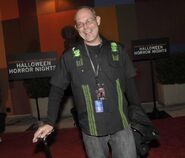 Retrieved from "https://halloweenhorrornights.fandom.com/wiki/Halloween_Horror_Nights_2007_(Hollywood)?oldid=107826"
Community content is available under CC-BY-SA unless otherwise noted.