"Each word sends a chill down your spine. Each page sends your pulse racing."

Halloween Horror Nights: Tales of Terror was the 15th Halloween Horror Nights event in Orlando. Located in Islands of Adventure exclusively for the third time, it was the first time that all of the mazes, scarezones, and shows were linked in a large event backstory. The Storyteller, Elsa Strict, weaved the tale of the world of Terra Cruentus, its ruler the Terra Queen, and her subjects. The event featured seven mazes (and Rat Run), four scarezones, and two special shows and ran for 19 nights from September 30 to October 31, 2005.

In 2006 it was awarded by Amusement Today with the Golden Ticket Award for Best Halloween Event.

The event icon, The Storyteller, told the story which wove through each maze and scarezone and depicted the roles of the various monsters and how they worked for the queen. As it went, the land of Terra Cruentus was a dark realm shrouded in myths, comprising of both Middle-earthian and modern mythos.

Guests entered through Terra Guard Run (Port of Entry), which was a melting pot of the people of Terra Cruentus. Characters from every island were featured scaring guests as they entered. The Queen herself was a dictator who rode a motorcycle featuring wings and the head of a wolf/bull hybrid. She ruled from her Terra Throne (Port of Entry Landing), a twisted tree forged of blood and steel by the hard workers of The Gorewood Forest Cemetery Mines (Jurassic Park). Her source of power was a sacrificial dagger called the Terra Throne Blade, which was used during human sacrifices, which were needed to satisfy her and continue her rule over the land. The blade was forged in the Fire Pits (Lost Continent) and was made out of blood turned into iron and the bones of previous sacrifices, courtesy of the Body Collectors.

The bodies of these sacrifices were given to the Body Collectors (Jurassic Park Discovery Center), who took them apart and kept only what could be salvaged. While the workers worked, the children of Terra Cruentus terrorized The Skool (Thunder Falls Terrace), especially around the Season of the Queen, a time of ritual in Terra Cruentus. While most of the realms worked, the realm of Iron Bone Gorge a.k.a. Blood Thunder Alley (Marvel Super Hero Island) roared to life with passionate vice, as the demons inhabiting the world lured guests to celebrate the resurrection of the queen through the drinking of Bloodberry Wine and escaping to the local Demon Cantina (Carnage Warehouse), where guests could be terrorized by the vampiric assailants who drank there. The Bone Chopper Riders aka the Black Guards also inhabited these places. Here, they partied until their duty came to deliver the blood of a sacrificed victim to Gorewood Forest, where it was turned into iron. The iron was brought to the Tangle Root Fire Pits where the Terra Throne Blade was made. Then the Blade was brought to the Terra Throne, where the ritual began and the cycle restarted while the used Blade was recycled and turned into a black goblet for the Bloodberry Wine.

Each night of the event, planted actors were brought up to the Terra Throne and sacrificed to The Queen. Their blood seeped into the Tree's roots, and a fruit called Bloodberry grew. The fruit was made into Bloodberry Wine and then drunk at the Demon Cantina. The actors were mutilated via special effects such as fake chainsaws and swords. On the final night, the Terra Queen herself was sacrificed to the Gorewood Tree.

The newest special effect introduced at Halloween Horror Nights: Tales of Terror was a new "helmet" technology. For the Terror Mines (Poseidon's Fury) house, every 10th guest was given a hard hat with a light on it. As the guest and their group proceeded through the maze, the light would go out, change colors, strobe, or stay normal. Sensors throughout the maze would designate what effect took place.

On busy peak nights, a portion of Universal Studios Florida was open for event-goers, which included a special chain link fence maze called Rat Run. On a platform above the maze stood Jack the Clown, heckling guests as they made their way through. 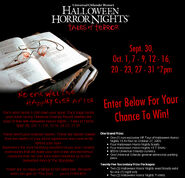 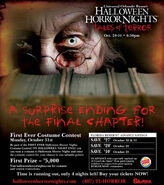 A picture of a computer with the HHN 15 website on its monitor. Photo from the owner of HorrorNightsCollector. 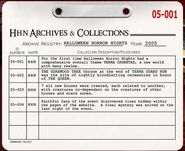 A picture of the Halloween Horror Nights: Tales of Terror map.

One of the scareactors that appeared at the event. 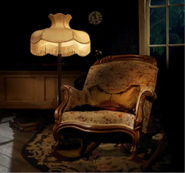 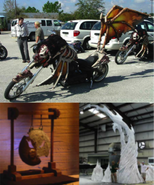 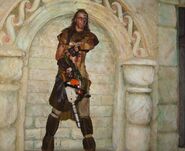 The 2005 drawer after the icons added their notes.
Add a photo to this gallery

Relic Uncovered
Theme that did played in the Ticket area.
Add a photo to this gallery

The front of the house shirt. 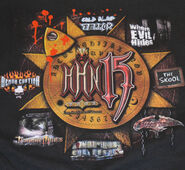 The back of the house shirt.

Retrieved from "https://halloweenhorrornights.fandom.com/wiki/Halloween_Horror_Nights:_Tales_of_Terror?oldid=65484"
Community content is available under CC-BY-SA unless otherwise noted.