"Guests have cringed in fear at the sight of just one. This year there are four – and there is no escape."

The Four Most Demented FiendsEdit

All four previous original event icons returned to host the "Sweet 16". This gave The Storyteller the name of Elsa Strict, and changed The Director's name from Paolo to Paulo. All four icons had their own mazes.

After four years at Islands of Adventure, the event returned to Universal Studios Florida for "Sweet 16". The 2005 Horror Nights website was removed and updated with a teaser page on July 1, 2006. On July 10, the official 2006 Horror Nights site went live. The official press release of the event was made on September 1, 2006. The site was fully updated the same day, revealing the complete roster of houses, scarezones, and shows.

The haunted houses represented were what was said to be the greatest in the event's history. With the addition of subtitles to each house's names, Universal Creative signified that these houses would be revamped versions with new characters, new effects, and possibly a whole new look. Previous icons such as The Storyteller, The Director, The Caretaker, and Jack the Clown returned for the year's event by making appearances in the houses. Also returning were characters such as Eddie and Darkness, along with the Chainsaw Drill Team, a staple of earlier Horror Nights. The Drill Team acted like a military unit as opposed to later years, when chainsaw scareactors would wander through specific areas of the park separately.

The icons were all brought back from hell in The Arrival (Mel's Drive-In Stage) by Darkness and his minions in order to take part in the event. They were all a part of Sweet 16: The Director's Cut (Studio Lagoon), where they discussed horror movies of the past. The Caretaker and his morbid cult returned with a new Victorian Manor mortuary in Screamhouse: The Resurrection (Soundstage 23), with the tormented souls of his victims. Jack was incarcerated in Shadybrook in PsychoScareapy: Maximum Madness (Soundstage 22), where he incited a patient rebellion. The Director returned in his All Nite Die-In: Take 2 (Soundstage 23), where he welcomed guests into his own sadistic "cut" of four movies: Scream, Hellraiser, The Ring, and The Silence of the Lambs, all spliced together. The Storyteller revived the business of an old roadside attraction into the Dungeon of Terror: Retold (Jaws Queue), where her whispers called guests deeper into hell. Other classic haunted houses to return were: Run: Hostile Territory (Earthquake Queue), where Eddie and his gang terrorized the voyeurs of a torture house inspired by the films Hostel and Saw; People Under the Stairs: Under Construction (Sprung Tent 2), based on the Wes Craven film, a demented house whose incomplete walls bleed; and Psycho Path: The Return of Norman Bates (Sprung Tent 1), a journey through the mind and nightmares of Norman Bates.

The scarezones in the event revisited houses and scarezones of Halloween Horror Nights XIV. In Deadtropolis: Zombie Siege (New York), Zombies fought the military and their weapon Robosaurus for control over the city streets (based on the film Land of the Dead). Blood Masquerade (Shrek Alley), an homage to Castle Vampyr, was overrun by vampires looking for new blood. Finally, Harvest of the Souls (Central Park), an homage to Field of Screams, brought pumpkin-headed fiends, goblins, and soul harvesters to life. 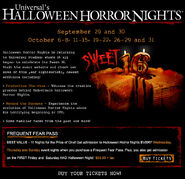 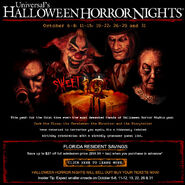 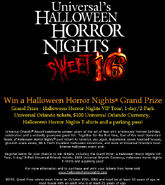 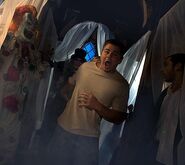 A picture of a man that appeared in a video about Halloween Horror Nights: Sweet 16.

A picture of the archive section of the Halloween Horror Nights: Sweet 16 website. 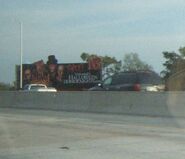 the 2006 Drawer on the website before the Icon reveal. 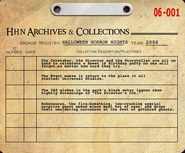 Add a photo to this gallery
PRESS RELEASES

ORLANDO, Fla. – Halloween Horror Nights is returning to Universal Studios - where it all began - to celebrate its "Sweet 16" with a horror-filled homecoming that will feature new twists on the most frightening scares from the past 15 years to create the ultimate Halloween experience.

Halloween Horror Nights at Universal Orlando, one of the country’s largest and most elaborate Halloween celebrations, will return to the Universal Studios theme park for 19 select nights running from Sept. 29-30 through Oct. 6-8, 11-15, 19-22, 26-29, and 31.

This year's event will feature seven classic haunted houses with frightening new elements, new shows - including a Halloween version of Universal 360 and a new version of the popular "Bill and Ted's Excellent Adventure" stage show. In addition, inescapable scare zones and haunted houses, featuring some familiar faces and shocking new scares, will have guests writhing in fear.

"In its 16th year, this is the perfect time to bring Halloween Horror Nights home to Universal Studios" said Jim Timon, senior vice president of entertainment for Universal Orlando. "We've had the opportunity to resurrect some of the most frightening and intense elements of years past. Our guests will be horrified by what we've done."

Universal 360 is a first-ever combination of 360-degree spherical projection, lasers, pyro effects, digital mapping technology–and four enormous spheres spread across acres of waterfront at the Universal Studios theme park. The spheres, which are 30-feet tall and 36-feet wide, float in the park's central lagoon and serve as giant outdoor projection screens. Digital mapping technology allows Universal to project images and effects on buildings around the lagoon– transforming entire buildings into walls of flame.

The summer version of the Universal 360 show has closed in preparation for the Halloween Horror Nights.

01 September 2006
AND THEN THERE WERE FOUR The Storyteller, The Director, The Caretaker and Jack Return
To Universal Orlando’s Month-Long Event

"We have robbed the graves of Halloween Horror Nights past to create a new, more terrifying monster," said TJ Mannarino, director of entertainment for Universal Orlando. "This year will be more intense and frightening than ever before, and the icons will dominate the entire event from haunted houses to shows...it's their world."

This year's event features seven classic haunted houses from the past 15 years of horror with frightening new elements. Halloween Horror Nights 16 also features new shows, including a Halloween version of Universal 360, and a new version of the popular "Bill and Ted's Excellent Adventure."

Also this year, guests are immersed in some frighteningly familiar scares in the streets, including the chainsaw drill team complete with precision routines and intimidating tactics, the rat lady being wheeled through the park in her rat-infested coffin, and zombies stalking the crowd on motorcycles, searching for the undead.

Dungeon of Terror – Retold – Mysterious whispers call you deeper into the dungeon. This is the place where The Storyteller demands the undivided attention of her "guests" until her story has been told. Hint: There is no happily ever after.

Run: Hostile Territory – An underworld where guests can fulfill their most ghastly fantasies and where the innocent can be tortured, dismembered and killed. Choose your path but beware when the lights go out: the guests become the victims and nothing can save you.

Psychoscareapy – Maximum Madness – Shady Brook Hospital's newest resident is about to take over. If you think you know insane, you don't know Jack. Step inside an asylum where the big top has padded walls and the sideshow is death.

All Nite Die In – Take 2 – For The Director, film is forever but pain is everlasting. He takes you on a cinematic journey through classic horror movies. Grab your ticket and come face-to-face with film's greatest evils.

Scream House – The Resurrection – Evil has risen again. Abandoned for years, this gothic mortuary contains the eternally tormented souls of The Caretaker's victims. Aided by a cultish group of followers – your time has come.

Psycho Path: The Return of Norman Bates – There is vacancy once again at the legendary Bates Motel. Your eyes prove to be useless as your mind takes over and leads you through the macabre nightmares of a pathological killer named Norman Bates.

People Under The Stairs: Under Construction – Is it possible for a house to be haunted before it is even completed? Focusing on the group experience, rather than the individual's, this house forces a party of guests to work together to uncover an escape route, or perish. Their destinies are not their own as they must place their faith in their leader, who is randomly selected. Wearing a lighted helmet, the leader must navigate his or her group through the black to investigate the skeletal form of a home so demented that even its incomplete walls bleed.

Each night throughout the event, guests can relive some of the most intense moments from Universal's horror film history during the Halloween version of Universal 360: A Cinesphere Spectacular. Presented by The Director, all four icons had a hand in creating this horrific lagoon show which will have guests cringing with fear throughout the night.

Universal 360 is a first-ever combination of 360-degree spherical projection, lasers, pyro effects, digital mapping technology–and four enormous spheres spread across acres of waterfront at the Universal Studios theme park. The spheres, which are 30-feet tall and 36-feet wide, float in the park's central lagoon and serve as giant outdoor projection screens. Digital mapping technology allows Universal to project images and effects on buildings around the lagoon– transforming entire buildings into walls of flame.

Retrieved from "https://halloweenhorrornights.fandom.com/wiki/Halloween_Horror_Nights:_Sweet_16?oldid=62289"
Community content is available under CC-BY-SA unless otherwise noted.