"He has come for you"
"You've taken a wrong turn somehow.  You're lost in a strange place.  The darkness thickens as an eerie mist surrounds you.  There's a light up ahead - the beacon from a lighthouse.  Your step quickens as a sense of relief washes over you.  As long as you can reach the lighthouse, you know you'll be safe.
The mist clears and you realize there will be no safe port for you tonight: you will be pursued by science gone astray, tortured by ancient demons, tormented by cartoonish freaks, run through a city gone bad, and welcomed into a house that you may never escape alive from.
You have stumbled into Islands of Fear."
-Press release info from IOACENTRAL

Hosted by The Caretaker, the event revolved around his followers and imaginations.

The event featured five haunted houses, six scarezones, three shows, and a special dance party area, and ran for 21 days from October 4 to November 2, 2002. A documentary that aired on the Travel Channel was filmed during the event, which allowed cameras to film the houses and gave other background information.

Halloween Horror Nights: Islands of Fear was documented in the Travel Channel special The Art of the Scare, produced by Lightship Entertainment. It documented the houses, special effects, and the overall feel of the event.

The Caretaker was not the original icon for Halloween Horror Nights: Islands of Fear. Cindy, the demented little daughter of mortuary owner Paul Bearer, was originally the icon of the event. In the event's premise, every land would be ruled over by her "playthings" - Spider-Man's nemesis Carnage, Nightmare, the Treaks and Foons, and The Grinch. Unfortunately, after a string of child abductions in the area, Cindy was abandoned and her father Paul Bearer morphed into Albert Caine. Cindy would later be introduced as The Caretaker's daughter and appeared with her father in the Shadows from the Past scarezone at Halloween Horror Nights: Ripped from the Silver Screen.

Caine was portrayed by actor Bryce Ward for publicity and television appearances, and an elaborate Opening Scare-a-monies which featured a victim being tortured by snakes and scorpions before being gutted.

"Take a terrifying journey through your own worst fears as the Caretaker transforms Islands of Adventure into one disturbing, horrifying nightmare after another."

In 2002, the event was moved from the Universal Studios park to its adjacent sister park, Islands of Adventure. The year's houses revolved around the imaginations of Dr. Albert Caine, also known as The Caretaker. Dr. Caine would lure his victims to his Victorian Manor to operate on them and find their soul.

Albert Caine- Formerly a surgeon and current caretaker of a funeral home, he became interested in the workings of the body and mind. He went on to do obscene experiments on the dead and living alike. In retaliation, a mob burned down his home, but he fled the scene through tunnels. With the aid of his true god, he infected the Islands with his darkness and created his own servants.

Kletus Kassidy- A former serial killer, he came across a strange symbiote from outer space and merged with it. In turn he became a far more menacing figure with few morally redeeming qualities. Albert Caine chose him as one of his servants and aided him in his alliance with the other Marvel Supervillains. With his hatred of the Marvel heroes, Albert ordered them to kill the heroes and take over their island.

The Treaks and Foons- Having a harder time turning the land of toons into darkness, Albert brought forth creatures who were neutered and made to smile all the time. The Treaks and Foons like to play pranks and have fun, but do not be fooled by them. They might have had a hand in creating a world where the fairy tales turned scary. 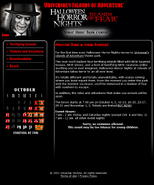 All images are from the Halloween Horror Nights: Islands of Fear website until noted otherwise. 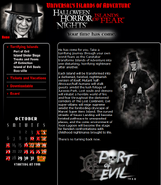 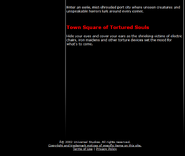 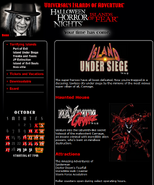 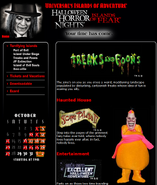 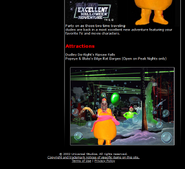 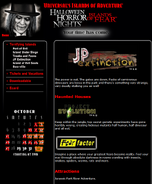 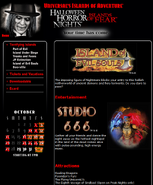 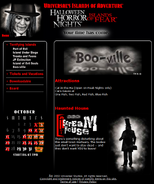 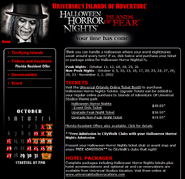 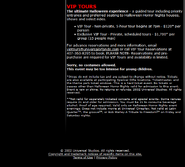 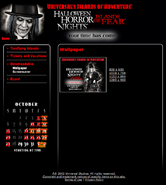 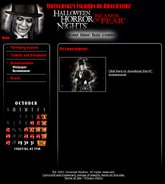 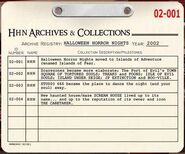 A picture of the Halloween Horror Nights: Islands of Fear map.

The 2002 drawer with edits from the icons. 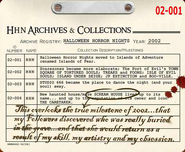 The 2002 archive registry with notes from The Caretaker. 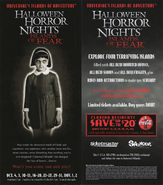 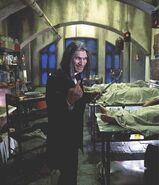 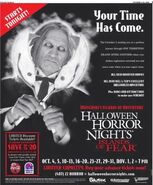 Image from the now defunct HauntFreaks.com. 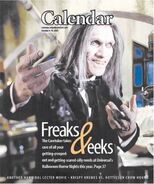 Image from the now defunct ioacentral.com.

Image from Halloween Horror Nights: The Art of Scare documentary 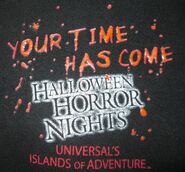 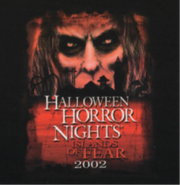 A shot of the guidemap which showcased the back of the main event shirt.

The front of the long shot glass that was at the event.

The back of the long shot glass that was at the event.

A picture of red shirts featuring the main characters of each island (excluding Port of Evil and Boo-Ville) that Universal sold during the event.