"He changed the face of Halloween and he's back!"

Halloween 4: The Return of Michael Myers (Hollywood) was one of the eight haunted mazes that were featured during Halloween Horror Nights 2018 (Hollywood). It was located in the Waterworld Queue.

Fall victim to the silver screen’s most deplorable slasher with Halloween 4: The Return of Michael Myers. Based on the cult-classic horror film franchise, Halloween, this new maze will truly have you on edge…of Michael Myer’s knife that is.

October 30, 1988, a seemingly comatose Michael Myers is being transferred back to Smith’s Grove Sanitarium. It has been a decade since his last killing spree in Haddonfield, but the townspeople know pure evil never sleeps. Michael awakens and slaughters the medical personnel transporting him, escaping into the night. Fortunately, Michael’s former psychiatrist, Dr. Loomis, knows exactly where he is heading; unfortunately for you, no one is safe from Michael Myers… 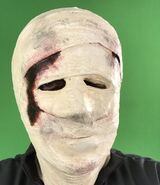 John Murdy playing Bandaged face Michael Myers for queue video that plays outside the facade of the house.

I Survived Halloween 4 The Return Of Michael Myers filter 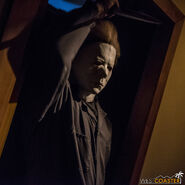 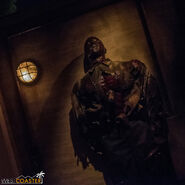 From Westcoaster.com
Add a photo to this gallery

Silver Shamrock Commercial (No Narration) (From the Original Score To "Halloween Iii- Season of...

Still He Kills
Add a photo to this gallery

Retrieved from "https://halloweenhorrornights.fandom.com/wiki/Halloween_4:_The_Return_of_Michael_Myers_(Hollywood)?oldid=116890"
Community content is available under CC-BY-SA unless otherwise noted.