Halloween (Orlando) was one of the eight haunted houses that were featured during Halloween Horror Nights 24. It was located in Sprung Tent 2.

On August 28th, 2014, Universal announced that a haunted house based off of the 1978 movie, Halloween would be coming to that years Halloween Horror Nights event. The house would feature many scenes of the iconic scenes from the movie. The codename for this house was "Captain", as Michael Myers mask is a William Shatner (Captain Kirk) mask.

Follow in Michael Myers’ footsteps as he begins his historic night of horror. John Carpenter’s classic original film comes to life – just as yours is coming to an end.

Guests would enter the house by passing the facade of the Myers house during which a video projection would play showing guests the backstory of Halloween. Guests would enter by passing through a hallway with various photos of the family before walking through the entry way where a body was lying on the staircase. While guests were busy looking at the scene, sometimes a young Michael Myers wearing a children's clown costume would pop out of the doorway just behind them.

The next room was the infamous kitchen scene, where guests could see Michael pinning Bob to a wall with his butcher knife. Then would come Judith's bedroom, with her gravestone on the bed. Guests would then enter a room made to look like a backyard in a residential neighborhood before entering a garage where a dummy dressed like Michael would be found attacking a terrified woman. A couple of rooms later would come the closest scene. The last room shows Dr. Loomis coming out of a closet and repeatedly shooting an approaching Michael in the chest. After guests walked outside, a final Michael Myers would pop out from behind a wall. 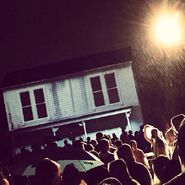 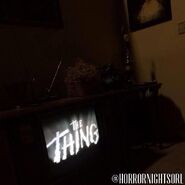 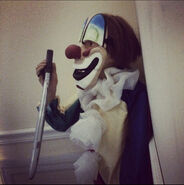 Myer's House
Add a photo to this gallery

Retrieved from "https://halloweenhorrornights.fandom.com/wiki/Halloween_(Orlando)?oldid=117003"
Community content is available under CC-BY-SA unless otherwise noted.