Halloween: Hell Comes to Haddonfield (Orlando) was one of the nine haunted houses that were featured during Halloween Horror Nights 26. The house was located in the Parade Warehouse. It was based off of the sequel to the original Halloween movie.

On July 7th, 2016, Universal announced that a haunted house based on the sequel to the original Halloween move would be featured at that years Halloween Horror Nights event. The house would feature many key scenes from Halloween II. The codename for this house was "Pumpkin" because of the pumpkin on Halloween II's poster.

The house would get a sequel based on Halloween 4 in 2018 titled Halloween 4: The Return of Michael Myers.

Michael Myers is still alive and is still out for blood in this all-new house.

The facade was a giant wall with the logo for Halloween II on it. You walk behind it to enter the Parade Building.

Then, you go to the exterior of the Haddonfield Memorial Hospital where occasionally the trashcans would move (caused by a cat). You pass by the front door which has a projection of blood on it. You then go behind the hospital where Michael Myers jumps out from inside of a dumpster. Going through the back door you end up in a hallway with barrels on the right. Behind the barrels is Michael Myers. Then, you go into a room where Michael Myers is hitting a security guard with the back of a hammer. After that, you go into a room with a cage that has various tools behind it (however, a hammer is missing). The next room has flashing red lights and a dead corpse on the floor. Behind a window is a projection of a girl's shadow behind the glass. After that you go behind the glass and see Michael Myers repeatedly dunking her head into an active therapy pool.

Guests then enter a hallway with multiple doors. Two of the doors open up to reveal a Female Nurse. Behind one of the walls you can see Michael Myers lifting up a nurse with a scalpel. Next, you go into a room where you see one of the nurses strapped to the table with needles taking the blood out of her body. Behind a curtain you can see a shadow of a man with a knife. After that is a room where you see Laurie Strode shooting Michael Myers with a gun. Guests then pass several tanks that can be heard hissing. The next scene is the hospital after being destroyed by the resulting explosion; the walls are burning and behind one of the burning holes in the wall is a burned Michael Myers. Finally, you go through a last room where Michael Myers jumps out from behind a wall. Then you exit the house. 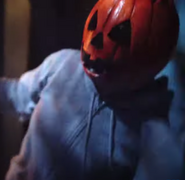 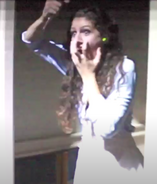 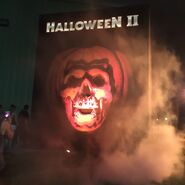 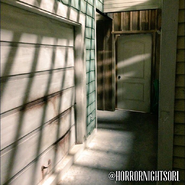 He Know's Where She Is

Flats In The Parking Lot

Mister Sandman
Add a photo to this gallery

Retrieved from "https://halloweenhorrornights.fandom.com/wiki/Halloween:_Hell_Comes_to_Haddonfield_(Orlando)?oldid=116641"
Community content is available under CC-BY-SA unless otherwise noted.