HHN: 20 Years of Fear was one of the six scarezones that were featured during Halloween Horror Nights: Twenty Years of Fear. It was located in Hollywood.

For their 20th anniversary event, Universal decided to have a scarezone celebrating the last twenty years of Halloween Horror Nights. This scarezone would be called HHN: 20 Years of Fear and would feature many scareactors from the events past. It was very similar in both concept and execution to the 2006 scarezone, Horror Comes Home.

The scarezone would be located in an area called Hollywood, an area of Universal Studios Florida located to the right of the park entrance. It is a recreation of the city of Hollywood (minus the famous sign). A similar scarezone to this would be featured in 2015. That scarezone was titled ICONS: HHN.

The lantern casts its light on some of the most frightening characters of Halloween Horror Nights past!

The Queen Of Hearts 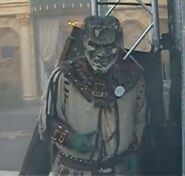 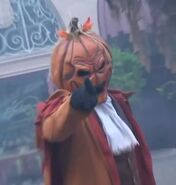 The Pumpkin Head
Add a photo to this gallery
Retrieved from "https://halloweenhorrornights.fandom.com/wiki/HHN:_20_Years_of_Fear?oldid=52498"
Community content is available under CC-BY-SA unless otherwise noted.