In 2011, Universal decided to build a haunted house based on evil versions of holidays. The house would feature a horror show host named H.R. Bloodengutz, and would be the comedy house of that year.

In 2011, every house tied into a story relating to a choice a character had to make (influenced by Lady Luck). This house's story was focused on Larry Kurtzberg who is a retired actor who works as a taxidermist. He gets a call from his agent (Lady Luck in disguise) saying he has the choice of staying in his taxidermist job or becoming creature feature host H.R. Bloodengutz. He chooses Bloodengutz and gets obsessed with the role, demanding everyone call him Bloodengutz. After the ratings of the show drop because of its disturbing content, the produce John Reynolds decides to cancel the show, causing Bloodengutz to torture him on camera. The house would be set on the final H.R. Bloodengutz broadcast, themed to movies featuring twisted versions of holidays.

The house would be located in the large extended queue for the Disaster attraction.

Join creature feature host, H.R. Bloodengutz, in his final televised broadcast as he presents a SCARE-athon of holiday-based horror that is guaranteed to cleave you screaming for more.

Join creature feature host, H.R. Bloodengutz, in his final televised broadcast as he presents a SCARE-athon of holiday-based horror.

Larry Kurtzberg was a young man who made his debut in the acting business on Broadway in the 1930's when he began his career at the Shubert Theatre in the musical comedy, Babes in Arms, at age 17. Years later, he began to depart from the acting business to take a job in his uncle's taxidermy shop. In the 1970's, Larry became desperate to break back into the acting business and was searching for a new role to take.

One day, Moyra, the secretary for his agency, the Audit Management Associates, (actually Lady Luck in disguise) left a message on his answering machine telling him that the best part the agency was able to get for him was the starring role as H.R. Bloodengutz on the "Midnight Horror Show" at the WKNB station in Carey, Ohio, and that Larry could either take the part or his agency would no longer represent him. Larry, of course, took the part as Bloodengutz.

Throughout the run of the variety show, Kurtzberg as H.R. Bloodengutz served as the host and would present a marathon of horror films in the show. Later, he began to host horror comedy movies about horrified versions of holidays from throughout the year such as Valentine's Day, 4th of July, Easter, Arbor Day, St. Patrick's Day, Presidents Day, Thanksgiving, and Christmas. However, as the show progressed, Larry became obsessed with his role as H.R. Bloodengutz and took it too serious.

Eventually, the WKNB producer, John Reynolds, noticed that the show's ratings had dropped due to the episodes being too disturbing, along with a loss of the advertising revenue and he informed Larry that the show had to be canceled. Wanting revenge on his producer for ending the show, a now insane Larry kidnapped Reynolds and members of his crew during his final televised broadcast of the Midnight Horror Show and tortured them horribly during the broadcast. The police showed up and arrested Larry.

Reynolds was dying of mortal wounds inflicted by Larry and was pronounced dead upon arrival at the Carey Memorial Hospital. The crew, however, recovered and were released from the hospital but quit their jobs at the WKNB station. Larry Kurtzberg was placed in prison for life, showing no remorse for his torturing of John Reynolds. The house is set during H.R. Bloodengutz's final broadcast.

Guests would enter the queue of this house in front of the entrance for Beetlejuice's Graveyard Revue. The queue would go through the Beetlejuice Theater and to a backstage area behind the Disaster building, where the line would loop around multiple times before entering the Disaster building from the back. A queue video would play on one of the walls of the building.

The queue video for the house is hosted by H.R. Bloodengutz, and includes introductions of the multiple scenes that are featured in the house, including Valentine's Day, Independence Day, Easter, Arbor Day, St. Patrick's Day, Presidents Day, Thanksgiving, and Christmas. A brief clip from each of these introductions will later be seen in the transition scenes in the actual house.

The opening scene to the queue video is introduced by H.R. Bloodengutz's producer John Reynolds (who has been kidnapped by Kurtzberg). Bloodengutz forces him to start off by saying "Hello everyone. It's once again time for everyone's favorite master of scaremonies, H.R. Bloodengutz." John quickly attempts to call for help, saying "If anyone out there is actually watching this, then call the police please! This guy..." before H.R. Bloodengutz stuffs a rag into his mouth. He then welcomes everyone to his Holidays of Horror marathon broadcast, explaining that "your dear beloved H.R. Bloodengutz got the axe...and not the fun, literal kind."

Throughout the queue video, Bloodengutz is shown to be torturing Reynolds by a variety of gruesome means such as shooting him with a cupid's arrow (Valentine's Day), covering his face with poison ivy (Arbor Day), stabbing him with a kitchen knife (Thanksgiving), putting firecrackers on his body (Fourth of July), removing his eye with a feather pen used to sign a Declaration of Independence prop (Presidents Day), and stapling garlands to him (Christmas).

During the St. Patrick's Day scene of the queue video, H.R. Bloodengutz' introduction to the next movie is interrupted when the police arrive at the studio and warn him to come out telling him "We know you don't want to hurt that man anymore Larry" to which he responds "I told you; my name is H.R. BLOODENGUTZ!!!". In the epilogue queue video, H.R. Bloodengutz concludes, "Well, my friends, I hope you enjoyed the final broadcast of the Midnight Horror Show. I know I did!" Then he gets up from his chair and slits the producer's throat.

As guests reach the end of the queue, they enter the dilapidated WKNB Channel 21 TV studio in Carey, Ohio.

Guests begin by entering into H.R. Bloodengutz's studio and then become part of the various Holiday Horror films as part of his "Holidays of Horror" broadcast. Each Holiday movie has it's own individual scene in the house, and each is preceded by a transition scene which is a vintage living room with a 1950's-era TV screen. Here, H.R. Bloodengutz will appear on the TV screen and introduce the next Horror Holiday movie that you are about to enter into. Each video which plays in the transition scenes are actually brief clips from the outside queue video of the corresponding holiday.

Guests enter the house through the WKNB Channel 21 station and into H.R. Bloodengutz's studio, where he alternates between welcoming them into his final televised broadcast, and torturing his producer who is tied to a chair in the studio. From here, guests enter the first Holiday room, Valentine's Day, where numerous severed body parts are seen struck by arrows into the walls as evil cupids attack from different areas throughout the room. The next scene is the Independence Day/4th of July room, where crates of fireworks are seen on the walls as the smell of gunpowder fills the air and a corpse is seen with a giant firework rocket shoved into his mouth, as zombie Uncle Sam pops out from different areas. The next scene is the Easter room where balls of Easter Basket confetti surprise guests from the sides of the room. Towards the end of the scene the "Feaster Bunny" (an evil giant Easter Bunny) attacks guests from the left side.

After this, is the Arbor Day scene, where a girl is seen sawing a man in half on a table, distracting guests from different actors which pop out from the sides of the room. At the end of the scene, a giant tree attacks guests. Following is the St. Patrick's Day room, where guests walk around a Pot of Gold in the center of the room as evil Leprechauns attack from behind rocks in different areas. Following, is the President's Day room as guests enter into the oval office and see a ticking time bomb on the resolute desk as George Washington and Abraham Lincoln zombies attack guests from the corners in the room.

Guests then enter the Thanksgiving Day scene, where a grandmother is seen roasted like a turkey and placed on a dining room table for the Thanksgiving feast as Pilgrims and Indians attack guests from throughout the room. The final scene is Christmas, where Santa's overworked elves attack while blasting "toy" machine guns around a fire place and Christmas tree. As guests enter the room, Mrs. Claus is seen dead on a table, strangled with Christmas lights and with stab wounds in her back. As guests round the corner past the Christmas tree, Santa is shown decapitated on a chair with bullet holes dotting the wall behind him as more "toy" machine gun-blasting Elves attack guests from throughout the room. The finale scene in the house is one final transition room where H.R. Bloodengutz appears on a TV screen and concludes the Midnight Horror Show's "Holidays of Horror" broadcast before slitting his producer's throat. Guests then exit the house. 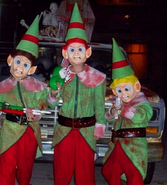 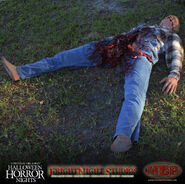 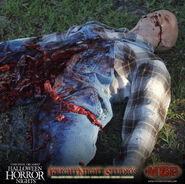 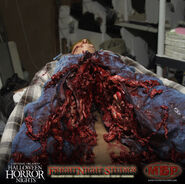 Retrieved from "https://halloweenhorrornights.fandom.com/wiki/H.R._Bloodengutz_Presents:_Holidays_of_Horror?oldid=117057"
Community content is available under CC-BY-SA unless otherwise noted.