Graveyard Games was one of the ten haunted houses that were featured during Halloween Horror Nights 29. It was located in the Parade Warehouse.

On August 8th, 2019, Universal announced that an original haunted house set in a graveyard where the ghosts were angered by rowdy teens would be coming to their Halloween Horror Nights event that year. The codename for this house was "salt", a reference to either how ghosts can be killed by salt, or by how the ghosts were salty about how the teenagers treated their burial ground.

Enter a cemetery at night, where disrespectful teens have awakened vengeful spirits. Don’t be caught dead here after dark.

In the Ascension Parish Cemetery, it’s normal to find teens playing amongst the tombstones. You’ll find yourself witnessing the repercussions of the disrespectful antics of two teens who have awakened the spirits of the dead. As you roam through the cemetery, you’ll wind through dark mausoleums and decaying piles of coffins. Ghosts of every shape and form will rise from the tombstones to exact their revenge as you try to escape the maze of crumbling tombstones and mausoleums. Skeletal beings, ghastly apparitions and vengeful spirits will try to drag you to the grave. And in the end, you’ll find out what happened to those who set out to deface the cemetery.

Evangeline Albright was a woman who married many rich men, all of whom died. She wanted a child, but could not bear any. Eventually, with the money from her deceased husbands, she built the Ascension Parish cemetery, a cemetery structured like a bunch of circles, one inside of another. She later died, and was buried in the dead center of the cemetery. Since then, many children have been buried in this cemetery, so Evangeline saw herself as the "Mother" of all the dead children. Ever since, legends have been spreading around the area about the hauntings, specifically "The Glowing Mother". Many teens have stated going into this scarezone, defiling the cemetery. This angered Mother, who killed each and every one.

The normal queue entered through the side of Fievel's Playland, where it would lead to the Curious George area of the Kidzone. The line would then go past a gate into the backstage, where another long line would take guests on a long walk to the Parade Warehouse. Projected on the side of the building, was a queue video depicting some people using an unspecified social media platform. In it, guests could read various texts and messages about the legends of the Ascension Parish cemetery, as well as watch videos of two teenagers, Sid and Nancy, who are currently in said cemetery. They would defile the cemetery, angering the ghosts who would then chase after them. Guests would hear audio of kids laughing, and the logo for the house projected on the wall as well. After that, guests would enter the house via a door on the side of the building.

Entering the building, guests would be greeted with the large entryway into the cemetery. A full moon can be seen as guests walk through the gates and into the first set of gravestones. Sid jumps out from behind a wall wearing a mask and mocks guests as he spray paints some of the gravestones. Throughout the room, guests could see flashlights in the forest and many disembodied voices saying "ghosts in the graveyard".

Entering a large mausoleum, guests would see how badly the teens defaced the graveyard, with graffiti covering every wall. A ghost disguised as a bush would jump out as guests walked by. Further into the graveyard, guests would encounter Nancy, who is trapped behind a metal gate. She pleads for guests to help her, before being scared away by the Glowing Mother. The next room features a statue on the left, who is revealed to be a Living Statue who jumps out periodically, and a brick wall on the right. Guests would be startled as the brick wall suddenly disappears to reveal Desmond a skeletal-ghost trying to claw its way out (Desmond would later attack guests on the other side). Also in this room, are Sid's mask and spray cans (signifying that something bad has happened to him), and rattling urns and vases on a shelf.

The next room features some more crypts, where one of the crypt doors would fall revealing a skeleton. Further down the room, guests would be attacked by Harper Leather on the left as a rattling coffin can be seen on the right. At the end of this room, a final ghost jumps out. After that, guests would enter a small room with a fireplace containing a rotted corpse. The following room features two ghost Grinner's on either side of guests with huge toothy smiles on their faces. Across from guests, The Glowing Mother would float towards them while saying "embrace your mother" as the two grinner's attack. Entering the next room, guests would see a door with glowing red eyes peeking out. Turning the corner, guests would see a vertical coffin with a skeleton inside. Periodically, the corpse would disappear to reveal the ghost of a woman who screams and reaches out to guests. Then Marsha attacks at the end of this room.

The next room features Angus Strickler peering at guests through a hole in the wall. Guests would also notice another vertical coffin, holding the corpse of Nancy with a distorted mouth. She is clutching a phone in her hands, with shows her crying mother asking her if she is o.k. Then Angus Strickler the ghost that stared at guests through the hole in the wall would jump out here. A Limp Skeleton would jump out at guests near the end of the room, while a Lester Stormberg and pair of ghost hands attack guests through a hole in the wall. Entering the next room, guests would see an endless corridor filled with candles as Sally jumps out on the left. The following room features a hallway, with three small cubicles on the guests left and right. Ahead, guests could see nine dolls. Suddenly, the voice of The Glowing Mother says "why have you defiled our place of rests", as she blows out the candles one by one in the cubicles. One of the corpses in the cubicles jumps up as Mother says "My children". At this point, the doll heads (actually baby skeletons) all raise their heads at guests as the White-Hooded Skeleton a corpse of a child attacks guests on the left.

The next room features many children with doll-like features. Periodically, a nursery rhyme would play before some of the children come to life to attack guests, such as Eliza Courtney. At the end of this room, the corpse of Sid could be seen still clutching a spray can. After that, guests enter a small room with the corpse of Nancy on the wall, who is holding a phone with a dead battery. The next room features a ghost girl saying "play with us" in a hole in the wall. Suddenly, a demonic voice comes from the same hole demanding guests to play with them as the girl swipes at guests. At the end of this room, a Dark Skeleton ghost jumps out (who is crawling on their hands and knees half of the time). Guests would then enter The Glowing Mother's tomb (the center of the graveyard), where they would be transported into a soundproof, pitch black hallway. All around, guests could hear the sounds of dead laughing children, asking the guests where they are. Exiting the hallway, guests would be facing the Glowing Mother, as a ghost jumps out from under her dress. Guests would then exit the house. 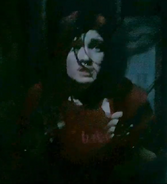 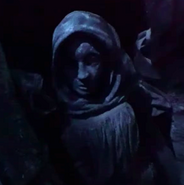 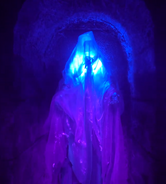 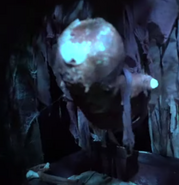 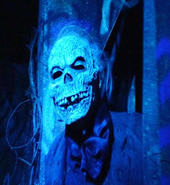 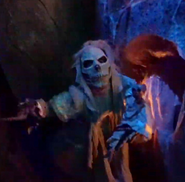 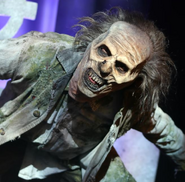 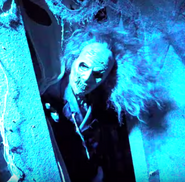 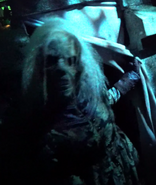 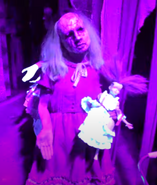 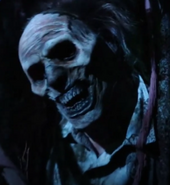 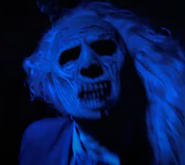 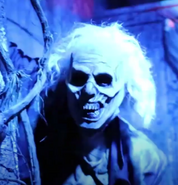 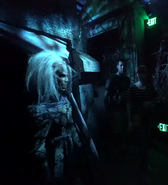 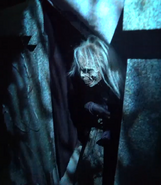 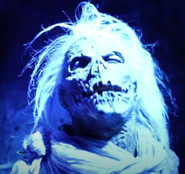 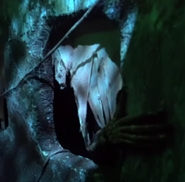 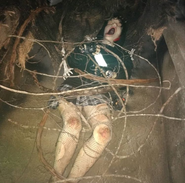 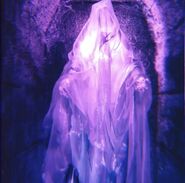 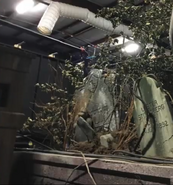 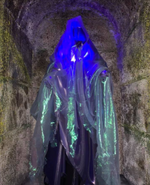 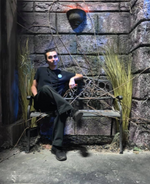 Colin Stetson and Sarah Neufeld - With The Dark Hug Of Time

Not Ready to Die

Voca Me
Add a photo to this gallery

Retrieved from "https://halloweenhorrornights.fandom.com/wiki/Graveyard_Games?oldid=87544"
Community content is available under CC-BY-SA unless otherwise noted.