Fright Nights (marketed as Universal Studios Fright Nights) was the original Halloween Horror Nights event held in Orlando. The event had classic Universal Monsters serve as the first ever Icons, and asked, "Dying for a Good Halloween Party?". The event, which was held for three nights in October 1991, featured one haunted house and twenty shows. The event would advertise itself as having over 35 different monsters.

Deciding to enact his will to gather fear From the hearts of many, Adaru the Sumerian God possessed the workers at Universal to helm a Halloween event. Through his lantern, Adaru resurrected Beetlejuice and the Classic Monsters to helm Fright Nights.

Beetlejuice and the Universal Classic Monsters were the first Event Icons ever.

Abbott and Costello met the Mummy and the Wolfman in a Universal Studios movie. Even Ma and Pa Kettle were menaced by monsters during their box office glory days for the studio.

This weekend and on Halloween night, Universal Studios theme park visitors will be face-to-face with a monstrous menagerie of classic movie ghouls during a special event known as Fright Nights.

The scary schedule includes a tour through the most ambitious haunted house ever created the Dungeon of Terror. Housed in the former Jaws pavilion, the dungeon is an excursion into the history and horrors of Universal's film legacy.

The creator of this highly touted attraction is Universal Studios theme park technical director Tim Sepielli. As the final touches were being added, Sepielli described what his crew has done with an unusual shopping list that included at least 50 gallons of fake blood, miles of cobwebs, authentic coffins and fake body parts.

Part of the attraction is a dark maze with slimy, bloodied walls where monsters jump out and a six-foot spider wraps visitors in its web. There is a homicidal maniac who breaks out of an asylum to terrorize the masses in one area. There also is an electric chair where you get to pull the switch.

Sepielli sounded like a proud father as he described his favorite fright in the Dungeon of Terror:

"When you walk down one corridor, you're walking on plexiglass," Sepielli said. "It lights up and there's a crypt under your feet with a girl banging and clawing at the plexiglass. It's filled with live rats that crawl all over her body. Of course, the trick is that we smear peanut butter on her so the rats really nibble on her. That's a lot of fun."

Six weeks of preparation went into the gruesome haunted house effects. But some visitors may not last the estimated 12-minute touring time.

"A lot of times it takes much less because people are literally running to get away from these monsters," Sepielli said.

Horror spills out into the streets of the Universal Studios attraction where dozens of monsters including the Fly, the Phantom of the Opera and the Creature from the Black Lagoon stroll and greet visitors.

"We'll have all of those characters as well as mutants, zombies and incidental dead people," makeup artist Mike Davey said with a macabre chuckle. "We're turning the whole park into a giant haunted house."

Davey said there was no effort made to tone down the gory details for families who attend.

"No, not at all," Davey said. "There are going to be some pretty gruesome characters. There's not many special effects as far as people getting legs or heads cut off, although you'll see some people with various body parts cut off through makeup."

Adding to the Fright Night fun will be The Pendragons and their bizarre magic shows every hour. Frightening freaks and sideshow geeks like the Elastic Lady, Cobra Woman and the Human Pin Cushion will perform their stunts in the streets.

A recurring character at the park, Beetlejuice, will host his Graveyard Revue, a one-man act that is being called "the greatest show unearthed."

Sixties rock 'n' roll stars Paul Revere and the Raiders will appear in in a Monster Mash Bash at Battery Park.

Horror film buffs can view digitally remastered prints of the original Dracula and Frankenstein films in the Big Scream Theater. These exclusive screenings are a worthwhile tribute to the studio's horror heritage. 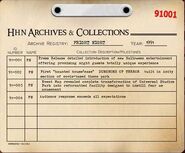 A picture of the Fright Nights archive registry that appeared on the Halloween Horror Nights: Sweet 16 Website.

Concept art for The Dungeon of Terror. 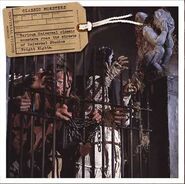 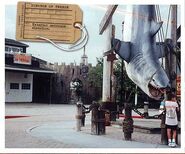 A picture of the facade for The Dungeon of Terror. 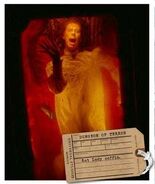 A picture of The Rat Lady that appeared in The Dungeon of Terror house.

The map for Fright Nights. 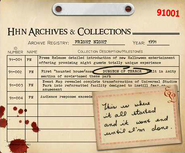 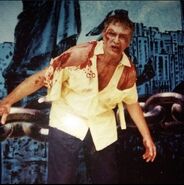 First scareactor made for Fright Nights Image from HHNQueen on Instagram 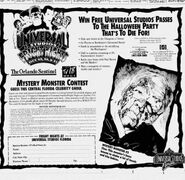 A picture of some of the scareactors that appeared at Fright Nights. 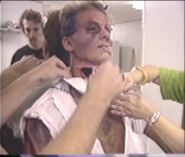 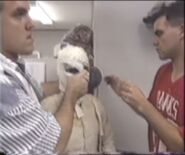 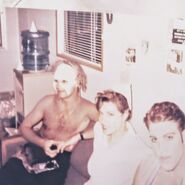 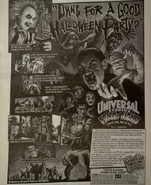