This article is a stub. You can help Halloween Horror Nights Wiki by expanding it.
"Your Worst Nightmare Meets Your Deepest Fear!"

Freddy vs. Jason was one of the nine haunted houses that were featured during Halloween Horror Nights 25. It was located in Soundstage 24 along with Body Collectors: Recollections.

On June 10th, 2015, Universal announced that a haunted house based off of both the Friday the 13th and the Nightmare on Elm Street franchises, would be coming to that years Halloween Horror Nights event. The house would feature major scenes from both franchises. The codename for this house was "Round Two", as this match-up was Round two, while the 2003 movie was Round 1.

The house would be one of two located in Soundstage 24, the other one being Body Collectors: Recollections. Soundstage 24 is one of the larger soundstage facilities designed to be used as filming locations for movies and television shows.

From the cursed Camp Crystal Lake to the nightmarish 1428 Elm Street, awake or asleep, you'll find yourself caught in the middle of this epic battle -- where the winner's reward is YOU. 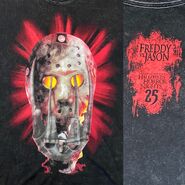 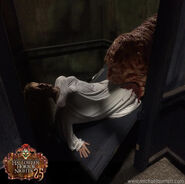 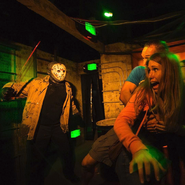 Image from HorrorNightsNightmares
Add a photo to this gallery

Retrieved from "https://halloweenhorrornights.fandom.com/wiki/Freddy_vs._Jason_(Orlando)?oldid=117344"
Community content is available under CC-BY-SA unless otherwise noted.