Frederick Charles Krueger (best known as Freddy Krueger) is a monster of pure evil and one of Jack the Clown's underlings. He served as one of the three sub-icons for Halloween Horror Nights: Carnival of Carnage and was the main icon of Live Your Worst Nightmare. He originated from the A Nightmare on Elm Street film series.

A man who is steeped deep into darkness internally, was burned alive by the parents of the children he murdered. This would come back to literally haunt them, as Freddy resided in a realm of sleep. He would use its warping powers to kill children in their dreams which would kill them in real life. As part of Adaru’s plot, Ringmaster Jack chose him a one of the main attractions for his traveling carnival.

A man who was given freedom to murder children in their sleep ironically due to retribution. He once was a part of the Carnival helmed by a mental patient. The following year, he himself dragged Universal Studios Hollywood into some sort of ”living dream” status where he and his nightmare minions went loose on the backlot. The mysterious dark energy allowed him to come back in following years.

Uses in the Events[edit | edit source]

Freddy Krueger as he appeared in the 1992 Bill and Ted show. 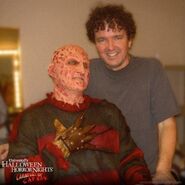 Freddy Krueger in the HHN 25 Commercial 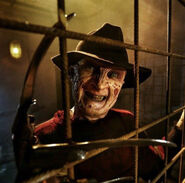 Freddy Krueger during the HHN 17 Opening Scaremony Credit to: AttractionMagazine
Add a photo to this gallery

Retrieved from "https://halloweenhorrornights.fandom.com/wiki/Freddy_Krueger?oldid=112279"
Community content is available under CC-BY-SA unless otherwise noted.