“For the past nineteen years, he’s been the master behind every frightened scream. Every ghoulish creature, every monstrous cruelty at Halloween Horror Nights have all been under his command. Now, for the first time ever, he emerges from the shadows to finally take ultimate control... and reign over all he’s created once and for all.“

From what little we get of this character; Adaru seems to hold a dark personality. Some of the press videos indicate that Adaru was getting agitated for being kept up in the Lantern so long, and really wanted to confront guests in the flesh.

Interestingly when considering the fact that he controlled EVERYTHING in the past (with the possible exception of 2008); it seems that judging by 2001, Adaru is not without compassion. He revoked having Eddie as the Icon for Halloween Horror Nights XI, and instructed Jack to take it over and make it lighter than the previous one due to the 9/11 terrorist attacks. It can be theorized that even for him, he found that Eddie would be too dark considering all that happened in the world that year, and that he does not deal terrorism.

Influencing events through an old Lantern kept in the Universal Studios Art & Design Department, Fear had been slowly using others to prepare for his eventual return. Early in 2010, around twenty photographs of previous Halloween Horror Nights were discovered with strange burn marks forming a bizarre pattern. An online paranormal research group, Legendary Truth, analyzed the photos and discovered that they were each a piece of a puzzle depicting a symbol. Assembling the puzzle at around 9:00 p.m. on August 24, the Art & Design building at Universal Orlando suffered a blackout, as the Demon inside was unleashed.

From the Book "Demons Among Us: Uncovering Evil", by Dr. Abraham Lockheed[]

We know fear as a response to a perceived threat: To be frightened or terrified. It allows us to be cautious when presented with a situation which might cause us harm. But before the Middle Ages, fear was not used to illustrate an emotional response but instead defined an event or phenomenon, a physical thing, an entity. This is not a new idea. Greek mythology calls by name not one, but two gods of fear.

The possibility that fear has a physical presence is mentioned in several ancient scrolls believed to be written by Babylonian priests. The scrolls describe that the demons of chaos, death, sacrifices, mythos and vengeance heralded the way for a greater evil; an evil trapped inside an object. The priests call out that every five thousand years these five demons take form and claim souls in preparation for the arrival of Adaru or, translated from Sumerian, fear. For when the demons have claimed enough souls, Adaru will reveal himself and bring hell with him.

However, in order for the five to even begin to prepare for the coming evil, they must first physically exist... they must be created. Egyptian wall paintings depict five men standing around a lantern and dressed to represent the demons of Adaru. The soul of Chaos is always depicted laughing wildly and revealing himself from, or holding an object like, a Pandora's box. Death is always calm and calculated, seen all in black holding an hourglass. Sacrifice is shown always creating something no matter the cost. If it’s a painting, it is his own blood that soaks the canvas and a sculpture is created using the bones of the ones he knows. Mythos is always represented by someone holding a blood stained scroll or book. Vengeance is depicted showing one individual bludgeoning another with an object. This object is always seen with light emanating from it.

Another wall painting reveals the five men bowing to what is believed to be Adaru the Demon of Fear. Shown standing in flames that lead back to the lantern, Adaru has a hand outstretched from which thorny brambles wrap the five men completely. Blood surrounds them.

Soon after his release from the lantern, Fear began to manifest himself over various electronic media in the month leading up to Halloween Horror Nights. The first evidence of this was in a soundbite from a security camera in the Universal Art & Design building during the blackout. At first, the noise sounded like a voice speaking gibberish, but when played backward, an ethereal, gravely voice could be heard speaking a message: "Nineteen years... Nineteen cycles... What has been decades for some has been Eons for me... On the Twentieth cycle... I shall be revealed!"


Not long after, Fear began to appear in video clips, revealing that nearly all of the previous Icons were merely pawns to help draw him into this world, and that soon he would change Halloween Horror Nights forever.

On September 16, during the filming of one of (but eventually was the only) the Production Die-ries in the haunted house, Horror Nights: The Hallow'd Past, Art & Design team member Heather Summers was possessed by Fear, demanding that all those watching come to the event so that he could feed on their terror. Fear claimed that he is inside everyone, and that soon they would all bear his "Mark", holding up a red-hot branding iron with a XX brand as he said this.

Soon after, videos began appearing on the Halloween Horror Nights website, where Fear began speaking through the previous Icons, his Five Heralds: Jack the Clown, representing Chaos; The Caretaker, Death; The Director, Sacrifice; The Storyteller, Legend; and The Usher, Vengeance. They claimed that the previous 19 years were only the beginning, and that a new era of darkness would soon arrive.

On September the 24th, Halloween Horror Nights: Twenty Years of Fear began, and Fear revealed himself in all his terrifying glory. After the event, the lantern's light went out and Fear was forced to retreat to his prison, where he waits patiently to be released again. It is rumored that Fear, despite being trapped, is still manipulating Universal Studios' staff members by making them design more creatures and haunted houses and scarezones for future events.

In recent years, it seems that Fear's influence has caused corruption amongst the Legendary Truth's senior staff's inner circle.

In 2015, some of his lantern-faced minions appeared alongside the Icons as one of Jack's maniacs, suggesting that Fear is still influencing the park staff.

In 2021, Fear could be seen ushering guests into his Lantern realm along with the other icons in the haunted house, HHN Icons: Captured.

The Portametus with the symbols of Chaos, Death, Sacrifice, Legend and Vengeance. 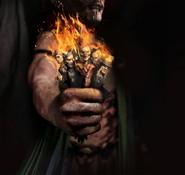 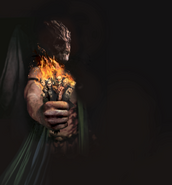 Fear in Fear Revealed. Image from Jared Clemons on Facebook.