Face Off: In the Flesh (Hollywood) was one of the seven haunted mazes that were featured during Halloween Horror Nights 2014 (Hollywood). It was located in the Year-Round Haunt Venue.

Syfy's hit reality/competition series Face Off pits some of the top special effects makeup artists in the business. Now, the most impressive creature designs from the show have gathered here... in the flesh! Step through the imposing castle gates to find yourself facing off against your worst nightmare: a twisted, new dimension crawling with monsters. Vicious human-insect hybrids lie in the dank shadows, while vengeful mummies, knife-wielding villains and a score of horrific creatures await you just around the corner. 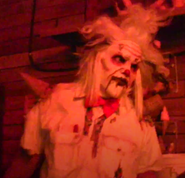 Behind the Scenes of Syfy's Face Off at Halloween Horror Nights 2014
Add a photo to this gallery
Retrieved from "https://halloweenhorrornights.fandom.com/wiki/Face_Off:_In_the_Flesh_(Hollywood)?oldid=114347"
Community content is available under CC-BY-SA unless otherwise noted.