Evil Dead was one of the eight haunted houses that were featured during Halloween Horror Nights 23. It was located in Soundstage 24.

On July 16th, 2013, Universal announced that a haunted house based on the Evil Dead remake movie would appear at the Halloween Horror Nights event for that year. The house would take guests through many of the most iconic scenes from the movie.

The house would be located in Soundstage 24, one of the larger soundstage facilities designed to be used as filming locations for movies and television shows. This would the be the first haunted house located in this soundstage.

Relive "The Most Terrifying Film You Will Ever Experience" as gruesome Deadites try to possess your soul. There is nowhere to hide as every creaking floorboard and tangled vine is just waiting to pull you down, making you one with the Evil Dead.

Gruesome Deadites try to possess your soul through every creaking floorboard and tangled vine as you relive "The Most Terrifying Film You Will Ever Experience".

Guests would enter the queue across from the New York Public Library. The queue followed a road that led to a series of loops that looped to the right of Soundstage 24. After the guests went through the loops, they would go around the soundstage and enter a door.

Entering the soundstage, guests would be lead into a large empty room with a walkway that led to the Book of the Dead on a stand, while dialogue clips from the original film play in the background. The next room featured enlarged replicas of the pages found in the Book of the Dead, leading up to a colossal recreation of the "Evil Dead" logo.

After that, guests arrived in the first room of the cabin, where a possessed Mia attacks guests. Guests are then go out into the forest where Mia's possession is shown (the Tree Scene in Evil Dead). Back into the cabin, guests find all of the teenagers bloodied and on the floor, where another Mia strikes from the opposite wall. The following rooms show all of the deaths of the teenagers (besides Mia), which in turn leads to the resurrection of The Abomination. The final scene shows the cabin on fire with The Abomination on the guests right and Mia with a chainsaw attacking from the left. 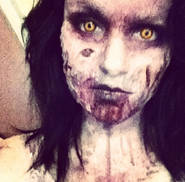 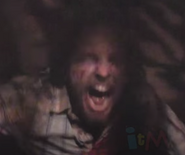 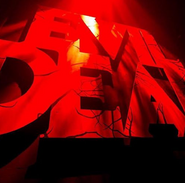 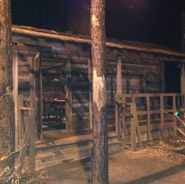 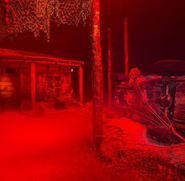 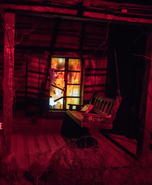 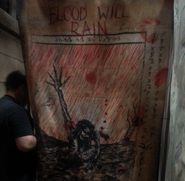 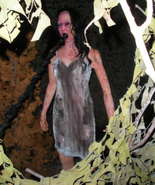 Retrieved from "https://halloweenhorrornights.fandom.com/wiki/Evil_Dead?oldid=114169"
Community content is available under CC-BY-SA unless otherwise noted.