"We find ourselves in a dark room, perhaps a basement somewhere. We can barely see the form standing in front of us. A flash illuminates the figure. We see a glint of steel. Was it the blade of a chainsaw?

Another flash, we see a silver muzzle, screwed into the flesh of this person's face.

Another flash of light blinds us, becoming more disorienting. We see a pale white eye staring at us with no emotion.

Suddenly we hear the loud roar of a chainsaw, feeling the intensity as it cuts through the air. One last blinding flash of light allows us to see an image of pure terror.

Eddie Schmidt (also known as Edgar Sawyer and Edgar Dice Slay) was the Event Icon that was intended to appear during Halloween Horror Nights XI. However, due to the 9/11/2001 terror attacks on the U.S., Eddie was pulled and replaced by the return of the previous event's icon, Jack the Clown. Eddie was meant to appear in the Run haunted house, and he would later appear in future events within the houses Horror Nights Nightmares, Run: Hostile Territory, and Jack Presents: 25 Years of Monsters & Mayhem.

Edgar "Eddie" Schmidt is the brother of Jack the Clown. Eddie, like his brother, was born in the Shady Brook Rest Home and Sanitarium in the late 1800's and also wears clown make-up to mask his burn scars. Eddie is portrayed as having been overly obsessed with 80s "slasher" horror films, particularly ones featuring chainsaw wielding maniacs such as The Texas Chain Saw Massacre. In his youth, he set up a haunted house event within the confines of the trailer park he lived in. A group of other teens set a fire in the trailer park as a prank, not knowing he was inside, trapping him and disfiguring his face and hands with severe burns for life. Later, Eddie would open his own variation of his brother Jack's funhouse, a "game show" called RUN. In it, visitors must escape from various torture devices and chainsaw wielders like himself without losing their minds. Later, with financing from his brother, he'd re-open RUN. This version was a murder-for-hire business, where Eddie and his goons would torture and kill victims for profit, like in the movie Hostel. Promoted under the misleading name of Oddfellow's Ultimate Ventures, the business catered to a rich clientele...which would inevitably meet the same fate as the victims they hired Eddie and the rest of the staff to kill. The original plans for Halloween Horror Nights XI would have seen a different version of Eddie waging a war with the Chainsaw Drill Team against Jack and his clowns. This incarnation of the character, Edgar "Eddie" Sawyer, wasn't related to Jack and had it in for the clown due to his supernatural tendencies. This storyline was removed for the event, along with Edgar Sawyer, and the event solely focused on Jack's return.

"Hiya! Remember me? The name's Eddie. Now my brother's bringing me back and I'm coming back with a couple of friends. Don't worry! I'm still a little bitter about the whole thing! But we'll square this off one way or another! And remember, I see you!" (Sweet 16 website promo vid)

(referring to Eddie) "Please note: Cast member's sense of smell will lead him to any open wound. If you are targeted as prey, please run like hell." (Halloween Horror Nights XIV website)

(referring to Eddie) "He's been lurking in the shadows, watching your every move. Waiting to unleash the rage that's been tearing him apart. Suddenly the roar of his chainsaw deafens you as he lunges for your throat." (Halloween Horror Nights XI letter)

(referring to Eddie) "Well, look who joined the family business! It's Eddie!" (voiceover from Jack Presents: 25 Years of Monsters & Mayhem)

Eddie as originally planned for HHN XI. Image from HNNightmares on Twitter. 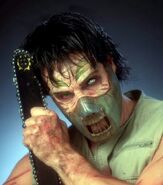 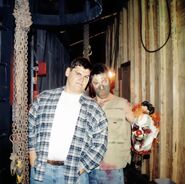 Eddie as he appeared in Fear Revealed. Image from Jared Clemons on Facebook.

Eddie as he appeared in ICONS: HHN. Image from Jared Clemons on Facebook.

Community content is available under CC-BY-SA unless otherwise noted.