Dragon Forge is a location in Terra Cruentus, the setting ofHalloween Horror Nights: Tales of Terror. It is the location for the scarezone, Fire Pits and the haunted houses, Terror Mines and Blood Ruins. The area is located in the Lost Continent.

This is a land of assembly, smoke and fire. Here, the Terra Throne Blade is created from Gorewood Ore in the Tangleroot Fire Pits, tempered in vats of fresh human blood. The Ore Mongers gather the materials for the creation of the Blade from the Terror Mines, which is also the home of vicious creatures that have existed long before the founding of Terra Cruentus. Just beyond the forge is the village Blood Ruins (aka Blood Abbey), home to defrocked monks who use leftover Blade materials for the creation of various torture devices. They would torture those who were proven unworthy to be sacrificed to the Terra Queen and use the blood from the torture to give to the Ore Mongers in the Dragon Forge in order to temper the Blade.

The forge is also home of the Gnomerats, people who claim to know the true secrets of Terra Cruentus, how it was founded, how it was before the Terra Queen came to be before the Gorewood Tree grew, and how to get past the tests of survival in the North Hollow. Unfortunately, they do not share this information to anyone under the fear of death at the hands of the Bone Chopper Riders.

THEY call me Guderalle and I alone know the true history of the forge. I do. For Guderalle be of Gnomerat birth and the Gnomerats walked here before the ore mongers came, before the Man Slaves surrendered, and before the Queen Herself arose. Before the first Blade was forged.

Methinks not. Not before Man Slave blood soaked the ground, not before the making of the Blade. T'was then the first flames tasted Tangleroot, t'was then the Gorewood iron began to melt and the first hammer sparks flew. T'was then smoke stink shrouded the moon, and ember glows cast strange shadows across the cold dead ground and the shipments began to arrive. Crates and crates on cart after cart, each one carefully marked with the sign of the mines from a nearby realm. And the carts never leave empty, each restocked with fresh Blades for the Throne.

Guderalle knows the secrets, the lies. Why the underground river spins. I know where the bodies from the old Abbey go. Really. I know the recipe for the bloodberry wine and how it intoxicates and why it feels so good and why it makes one do things they do and the things they never should. Guderalle be of Gnomerat birth and so know the way beyond the Hollow to Maldaken Pass. I know of the tests, but if I help you through, THEY will do to Guderalle what they're waiting to do to YOU.

On the map of Terra Cruentus found on the Halloween Horror Nights: Tales of Terror website, visitors could click on and view the Dragon Forge region of the map. There, they could click on areas for Blood Ruins, Terror Mines and Fire Pits to go to their respective website pages. There was also a label for the Burning Oak, though clicking on it does nothing. Finally, visitors could click on the Terra Blade to hear a voiceover clip about the area. 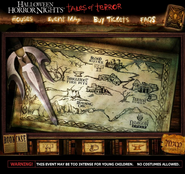 A map of Dragon Forge
Add a photo to this gallery

Clip that played when the Terra Blade is clicked on:

Song that played on the Website Page: Ancient Temple by Midnight Syndicate

Retrieved from "https://halloweenhorrornights.fandom.com/wiki/Dragon_Forge?oldid=111127"
Community content is available under CC-BY-SA unless otherwise noted.