Dracula Untold: Reign of Blood was one of the eight haunted houses that were featured during Halloween Horror Nights 24. The house was located in Soundstage 24 along with AVP: Alien vs. Predator. It was based off of the movie by the same name.

On August 7th, 2014, Universal announced that a haunted house based off of the 2014 movie, Dracula Untold would be coming to that years Halloween Horror Nights event. The house would feature many scenes from the movie. The codename for this house was "Synergy", as the house attempted to make people see the Dracula Untold film.

The house would be one of two located in Soundstage 24, the other one being AVP: Alien vs. Predator. Soundstage 24 is one of the larger soundstage facilities designed to be used as filming locations for movies and television shows.

Your demise could come from bloodthirsty vampires or the attacking Turks as you attempt to survive the terrifying journey that turned the one-time hero into Dracula.

The facade was a giant castle.

The facade for this house. 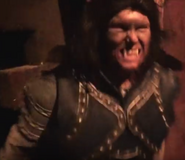 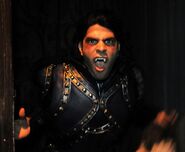 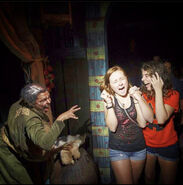 From mikebartistry Instagram
Add a photo to this gallery

Retrieved from "https://halloweenhorrornights.fandom.com/wiki/Dracula_Untold:_Reign_of_Blood_(Orlando)?oldid=106688"
Community content is available under CC-BY-SA unless otherwise noted.